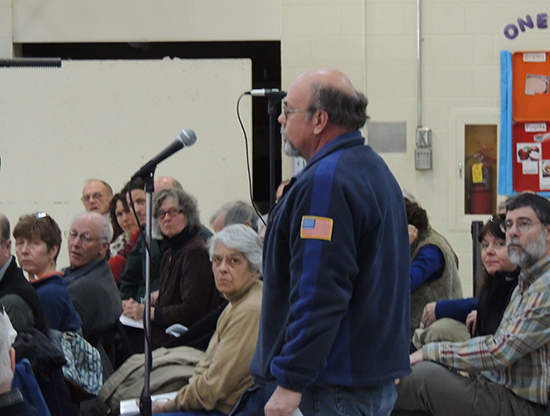 The Waitsfield Select Board acted on several recommendations from the Town Meeting Study Group aimed at increasing participation in the annual event.

Starting with next year’s Town Meeting, the meeting will start at 5 p.m. with the town budget to be discussed and voted on as close to 6:30 p.m. as possible. Members of the committee recommended this change in hopes of attracting voters whose day jobs interfere with their ability to attend and participate in Town Meeting.

Committee members Deri Meier, Sally Kendall and Nancy Turner discussed the proposed changes with the select board at an August 24 meeting. They were appointed by the select board after Town Meeting 2014 to look at ways to increase Town Meeting participation. Meier spearheaded an effort to have voters approve voting for budgets via Australian ballot in 2014. After much debate from the floor, that effort failed but led to the creation of the committee. As part of their work they researched what other communities have done to increase participation. They also conducted a survey of voters.

“I think we should focus on the first three recommendations, a 4 p.m. start time, specific time for town budget and separating the school board meeting from Town Meeting,” Meier said, noting that the fourth recommendation, that the town warn a special meeting for this fall to vote on the issue of whether or not budgets should be voted by Australian ballot, was controversial and hence the committee did not take a position on it.

Board members discussed whether a meeting that started at 5 p.m. would provide enough time and whether there could or would still be a communal meal as part of the meeting. The town business portion of Town Meeting generally runs between 3 and 3 ½ hours.

Committee member Nancy Turner told the board that Middlesex, which has changed its Town Meeting start time to 4 p.m., has people bring bag lunches to eat in their chairs and volunteers organize dessert for when everything is done.

“I thought your proposal was to move the school portion to the night before,” said board member Logan Cooke.

Waitsfield Elementary School principal Kaiya Korb was present at the meeting to represent the feelings of the school board on the matter.

“My understanding of your goal is that it was to increase participation. Will people come the night before to discuss the school budget? The school meeting at Town Meeting has fewer in attendance than Town Meeting. The school board feels that we’d lose attendance by having two separate times. The board was open to the will of the community but also felt that being able to have the discussion during Town Meeting was valuable because the education funding formula is so complex,” Korb said.

Cooke said that the reason the night before Town Meeting was considered by the board was because any bond vote articles must be discussed at a pre-bond meeting the night prior to the vote.

Town administrator Valerie Capels raised the issue of ballot counters needing to be able to do their work after the polls close, although Cooke noted that electronic ballot counting was coming soon.

“We were hoping for a motion and decision on the first three proposals understanding that there are administrative problems with each one,” Meier said.

“After you take action on the first three we can take up the fourth recommendation,” he continued.

“We’re wrangling with 1 through 3 because of ballot counting concerns,” said board member Kari Dolan.

“I don’t think we should let that prevent us from making changes to increase participation,” board member Scott Kingsbury said.

Korb pointed out that the school board would have to vote to have the school meeting at 4 p.m., prior to Town Meeting.

Regarding holding a special meeting for voters to decide on whether to vote budgets by Australian ballot, Meier said the committee did not take any position pro or con on Australian ballot.

“Everyone had an opinion. The only way to resolve it is with a vote of the electorate. But to focus the discussion the committee should do more work. There are options other than a straight Australian ballot and there are ways to accommodate the ability for people to make motions from the floor. What is the charge of this board to investigate what options are out there?” Meier asked.

The board voted to change the start time to 5 p.m., set an estimated time for the budget discussion, talk to the school board about changing its meeting and also to ask the committee to continue the work they’ve been doing.