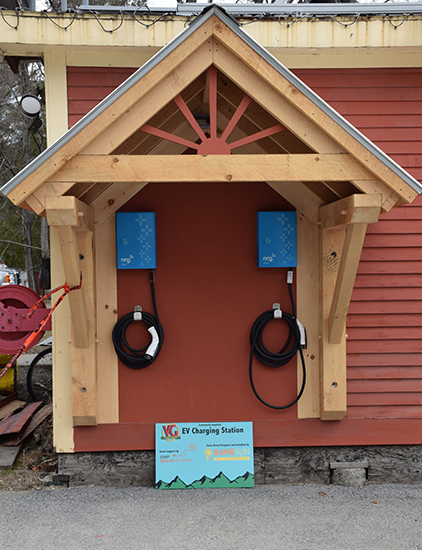 Last week, the Harwood School Board considered the pros and cons of installing an electronic vehicle (EV) charging station on site, ultimately voting not to move forward with the project at the time but to look into it for next month.

The board was approached by Bill Powell of Washington Electric Cooperative about the opportunity to install a Level II EV charging station after his company was awarded a grant and selected Harwood Union High School as one of five locations across which it would like to distribute its funds.

If Harwood were to accept the offer from Washington Electric, “The value to you today is about $18,000,” Powell said, explaining that the grant would cover the cost of installing an EV charging station and pay for operating costs for five years. After five years, the school could decide to discontinue the station or cover its network service cost of about $2,600 per year, Powell explained.

With the EV charging station, “You can’t lose money, even if you just cover your own cost,” Powell said, explaining that the school would be responsible for setting the fee for electricity for users. The school would also decide who could use the machines and when, Powell said, explaining that they could be open to only those at the school or to the general public.

“I don’t see an overall benefit for students in the building,” board member Garett MacCurtain said of an EV charging station.

“I see it more as a benefit for faculty and staff,” Powell responded, although he said that more and more students could be driving electronic cars in the near future. “It’s kind of like ‘If you build it, they will come,’” he said.

VIABILITY OF PUBLIC USE

An EV charging station would be less an educational resource and more a service the school could provide to the community, Washington West Supervisory Union (WWSU) superintendent Brigid Scheffert Nease said, although she questioned the viability of public use.

“I’m trying to envision the person that’s coming to charge,” Scheffert Nease said. “We’re kind of in the middle of nowhere,” she said of Harwood’s location. “It’s going to be brutally cold and there’s no cell service,” she said, speaking to the lack of a space for drivers to wait while their battery charges and their inability to call for help if something were to go wrong.

The EV charging station could be available only to students, faculty and staff during school hours and to members of the community after school hours, Harwood Union High School co-principal Lisa Atwood proposed, but then the board would have to issue special charge cards to its users, “and who’s going to do that?” she asked.

Scheffert Nease also was concerned with the processing of finances and information associated with the installation of an EV charging station. “It’s additional work for our central office,” she said, to which Powell explained that Washington Electric Cooperative was responsible for the reconciliation of funds.

With regard to Powell’s proposal, “I don’t think it makes sense for us to get involved right away because there’s got to be some learning,” board member Dale Smeltzer said.

“But why not jump on this opportunity when there’s no upfront cost?” board member Rosemarie White asked, explaining that the school could move forward with installing the EV charging station and develop its policies for the facility simultaneously.

Ultimately, a motion to move forward with installation did not pass at last Wednesday’s meeting, but the board discussed holding another vote on the project at its meeting next month, as two members were absent this past Wednesday.

“I think we’re saying we’ll get back to you,” board chair Deb Hunter told Powell, who said he’d be happy to attend next month’s meeting.

“I want to work with Harwood,” Powell said. “This is an important location in my little universe,” he said, explaining that if the board decided to move forward with the project he could request an extension for the funding to give the school more time to work out the details.