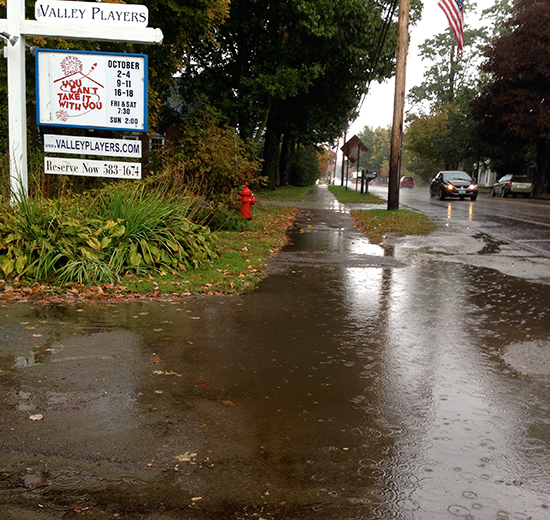 “We acknowledge as a project team that there may be some disagreement,” Kevin Russell said, starting out this week’s public hearing about Waitsfield Village sidewalks on the defensive.

Russell is the local project manager for the sidewalk that would replace the path that currently runs along the west side of Route 100. The town has received grant funding for all but 10 percent of the cost of the project. As proposed, the project will run from the Valley Players Theater to Farr Lane.

At the steering committee’s public hearing, which took place Tuesday, October 13, Russell presented the most recent draft of the conceptual design of the new sidewalk that would run along the west side of Route 100.

The concrete sidewalk would be separated from the road by a 9-foot greenbelt (or grassy area), a curb and a 4-foot shoulder, engineer Greg Goyette explained. The most recent draft of the conceptual design plan shows the sidewalk in “more or less the same spot” as the existing path and includes very limited space for on-street parking.

Because there is on-street parking along the west side of Route 100, however, the design plan includes crosswalks that will allow drivers to park and safely access buildings across the street.

Right now, one of those crosswalks would be located directly in front of the Valley Players Theater and one would be just south of Waitsfield Wine Shoppe, between the store and Village Grocery.

On Tuesday, those on the board of the Valley Players Theater expressed concern that the new sidewalk will not allow them to back cars and trucks up to their front entrance, which is the only feasible way to get large, heavy equipment or set pieces into the building.

In response, Vermont Agency of Transportation (VTrans) project supervisor Rachel Beauregard said that they could do some hardscaping and widening of the sidewalk in that area to allow the Valley Players access.

Also of concern to the theater was having a safe place for parents to drop off their children in front of the building, as the curb on the new sidewalk would prevent cars from pulling over on the grass, as they have been doing.

The steering committee discussed the possibility of moving the sidewalk in front of the Valley Players Theater back from the road to allow for parking or a drop-off area, but then they’d have to move the entire sidewalk back for plowing reasons, Beauregard said, and there’s no room.

“There is no perfect solution,” Russell said. With the new sidewalk—regardless of what the final design looks like—“everyone will be modifying their behavior in some way,” he said.

Right now in Waitsfield Village, “The number one challenge of pedestrians is crossing Main Street,” Russell said. A crosswalk in front of Waitsfield Wine Shoppe would be well-used, Russell said, but its construction would eliminate parking in front of the store.

The loss of the off-street spots is very concerning for Waitsfield Wine Shoppe owner Joan Wilson, who sits on the steering committee, as most of her customers only stop in the store for two or three minutes at a time to pick up a bottle or a six-pack and they’re not going to go out of their way to find parking, she explained.

“The Wine Shoppe, it seems to me, is taking a big hit,” Waitsfield Select Board member Sal Spinosa said, with the most recent draft of the conceptual design, “and I have a real problem with that.”

And so, at this week’s meeting, the steering committee looked into the possibility of moving the crosswalk farther south so that Waitsfield Wine Shoppe could have at least one off-street parking spot in front of the store.

Due to a federal law that states that there can be no on-street parking within 20 feet of a crosswalk, however, with that plan Waitsfield United Church of Christ would lose its handicap spots in front of the building, which are also used for hearses during funerals.

“Everyone probably feels some frustration out of this,” Waitsfield Select Board member Kari Dolan said of the very specific negative consequences that are borne of a project that will positively affect the village as a whole.

Because the construction of the new sidewalk will be paid for in part with money from a federal grant, it will have to comply with federal standards, Beauregard said, but that doesn’t mean it can’t be altered to fit the needs of the community. “I think it’s 100 percent doable,” she said.

Spinosa criticized the most recent draft of the conceptual design as “cold and off-the-shelf,” he told Russell on Tuesday. Moving forward, “I want to see some humanity here,” he said, explaining that the project could do better to acknowledge the needs of residents and business owners, and that the plan could be “delivered in a way that’s more personal.”

Russell plans to present an updated draft of the conceptual design to the public sometime in November.