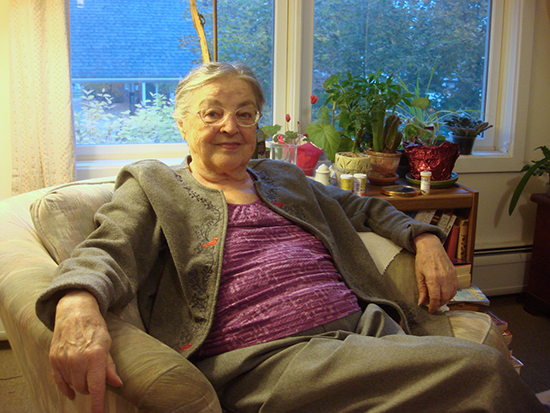 As waves of mass migration advance across Europe, a resident of Evergreen Place in Waitsfield is reminded of her past. Trudy Lark, 84, was born in Yugoslavia – in the same region of present-day Serbia where people are seeing thousands of Middle Eastern refugees traversing daily through the “Balkan route” into Western Europe. She too fled her country; in 1941, Russia invaded Yugoslavia during World War II forcing her family on an exodus that would last decades.

At 13, Trudy’s private German school was taken over by Russian troops and both students and teachers boarded military-controlled trains. They went north to Hungary, then west to Vienna, then to Czechoslovakia where they lived in a school gym, sharing bunk beds and little food. But the Russian invasion followed in their path and they were again displaced.

This went on for many years. The German army forced her father to join their ranks and the rest of her family packed up wagons and horses and headed to present-day Poland. Other family members stayed behind and were transported to slave labor camps.

Trudy and her sister eventually reconnected with her mother and other siblings, using the address of a cousin in Austria to send each other letters and devise a way to unite. In Austria, they lived together in a hotel allocated for refugees by the Austrian government. Here, falling bombs became routine.

While the war had officially ended in 1945, displacement continued. The owner of the hotel that housed Trudy and her family kicked them out and Hungary took control of Yugoslavia. Trudy was “stateless” – transported back and forth between Austria and Germany.

The German state eventually allowed Trudy’s family to enter and they were placed in a small village for three years. While Trudy and her sister lived with one family, her mother and brother lived down the street with another. She recalls, “Nobody wanted us; the townspeople came around and look at us like vultures.”

With guaranteed jobs and a family member to vouch for their health care costs, Trudy and her sister were granted passports to the U.S. In October 1949, they landed by plane in New York City. Trudy learned English very quickly and applied for U.S. entrance on behalf of her family including her father whom she hadn’t seen in eight years. They arrived several years later.

At 19, Trudy acquired citizenship while working in a Philadelphia restaurant and met her future husband, a lieutenant. Together they moved to Vermont – first Windsor, then Middlebury, then Brattleboro – for his work as a teacher. Later, she moved to Moretown and worked at Mehuron’s for almost a decade. Trudy loves talking to people, cooking, and reading and asserts, “I’m lost without a newspaper!”

When Trudy compares her past to the current refugee crisis, she is grateful for the living conditions she endured. She explains, “We were like Syrian people today, but we didn’t have to walk many thousands of miles as they do. We didn’t have food, but at least we had transportation.” Regardless of these contrasts, Trudy laments that history is repeating itself: “You thought it was the top of cruelty and, yet, here it is again.”