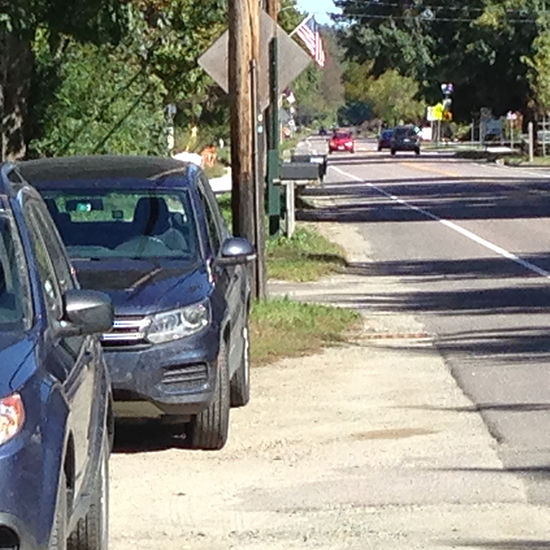 After another lengthy meeting regarding the Waitsfield west village sidewalk project, the Waitsfield Select Board again requested a simpler sidewalk than the one that the project manager is proposing.

This project includes constructing a sidewalk from the Valley Players Theater to Farr Lane. The town has a $332,000 grant with a 10 percent match for the project.

The select board met this week on October 26 with Kevin Russell who is the town’s project manager for the project. Russell appeared before the select board in August and again in September to discuss the project. The August meeting involved a site visit along the proposed sidewalk route which raised concerns from the town about crosswalk placement and loss of parking.

In September, Russell met with the board again and the board appointed several new members to the sidewalk steering committee. That group met earlier this month and Russell was back before the board this week to explain proposed changes.

The original proposal eliminated the head-in parking at Waitsfield Wine Shoppe and also called for removing the shade tree between Village Grocery and the wine shop as well as the stone wall in front of the Village Grocery porch.

Other areas of concern were crosswalk placement that eliminated hearse and drop-off parking in front of Waitsfield United Church of Christ as well as a drop-off area and delivery truck access for the Valley Players Theater.

This week Russell told the board that the crosswalks could be moved slightly to address the town’s concerns and, in so doing, maintain one parking spot in front of the church and maintain a drop-off area as well as delivery area for the Valley Players. He suggested that it is time for a second public hearing on the project and told the board that the engineering firm, Stantek, could create renderings of the proposed route for a public meeting. The cost of one rendering is $900 and two could be had for $1,300.

“I’m not pushing for those, but they’ve always been useful for people to see. It might be money well spent,” Russell said.

“Another item we recommend is pedestrian lighting at the proposed crosswalks. It’s an action item for you to consider. I don’t have an estimate on that cost and didn’t get a scope of work on that so it’s premature to ask you to make that decision,” Russell said, noting that he recommended pedestrian lighting on each side of each crosswalk.

“Where is the money going to come from for that?” asked select board chair Paul Hartshorn.

“Well I haven’t done an engineer’s estimate based on a final. We’re not prepared to provide you with an actual estimate of construction cost, but it’s my experience it’s going to be a little more robust than the original proposal. That was done three years ago and the state withheld $50,000 from the award and the project was underestimated to begin with. I’m here to tell you that I think this project will be over budget. I don’t know the amount yet. I think you could apply for more funding from the Vermont Bike and Pedestrian fund next summer, at a 10 percent match. Or in the fall you could apply for a Transportation Alternative grant with a 20 percent local match. You could use your capital reserve funds for the local match. You should consider that as you’re going into budgeting for 2016,” Russell told the board.

Hartshorn asked about the fate of the tree between Village Grocery and Waitsfield Wine Shoppe and whether it still had to be removed.

“It’s a little premature to put this out to the public because the committee hasn’t weighed in. I have to say it looks promising to me personally that there’s a good possibility that we can have our cake and eat it too. We can have the crosswalk that we want and additional on-street parking on the west side. We’ve reconfigured the crosswalks and lost fewer parking spaces, but the tree, getting back to that, to allow for on-street parking in front of the wine shop, that requires pushing the sidewalk west, requiring the tree to go,” Russell said.

“The state said the tree and stone wall have to be removed. The big maple won’t survive the construction if we do the sidewalk in the alignment we propose,” Russell said.

Russell enumerated things that the state will not pay for (via the grant) with the proposed changes, including the subbase, the pavement and striping for parking spaces, and pointed out that the town would be responsible for paving those parking spaces.

“I think it would be the business owners’ responsibility,” Hartshorn said.

“The state will not maintain them. They may ask town to plow around the curb extensions as well. We’re going to ask you to take on the more effort to maintain this project. Hope we can convince you it’s worth it,” Russell said.

“Every time we turn around this goes up in price,” Hartshorn said.

“I had hoped the scope would narrow in and I still hear a lot of talk about crosswalks and curbing and parking. I would like to see this project be kept as simple as possible because we already have a functional sidewalk. It sounds like we’re going to exceed the grant on this,” board member Logan Cooke said.

“Why are we already over budget?” asked board member Kari Dolan.

“You could reduce the scope of the project. The conceptual plan was approved by this board in 2011. That plan did not include a crosswalk at the Valley Players. We’re recommending that crosswalk. The original estimate did not include adapting the drainage that we’re proposing. Those are big ticket items. We have a little bit more of a robust project going in,” Russell said.

“Well I’d suggest no renderings for $1,300,” Dolan said, noting that she was looking forward to the next steering committee meeting.

Dolan pointed out that on parts of the east sidewalk, running south from Bridge Street there are no curb extensions because the proximity of the buildings to Main Street prevented them. She asked why similar exceptions for pre-existing infrastructure (tree/stone wall) could not be made for the west side sidewalk between the Village Grocery and the wine shop.

Russell said that on the east side of the crosswalks he is proposing curb extensions. On the west side they are called curbs, he said, referring to the space between the sidewalk and the start of the street.

“And I’ve talked to the plow guys. They’ve evolved. They know how to plow around curb extensions,” he added.

Board member Sal Spinosa told Russell that the sense of resistance pushback he is getting from the town is in response to the demands being placed on the town by VTrans.

“The general thrust is that they’re trying to cow us into adhering to their canned version of this sidewalk. Folks are getting more and more interested in a simple solution here. We’re leaning towards simplicity. The sense is that in the end we already have a sidewalk there. Why can’t we just duplicate it? Are your next set of renderings simpler than what we have seen before,” Spinosa asked.

“No, they’re more complicated because of the changes we’ve made in crosswalks and parking. We did not make the project simpler. We’re accommodating the concerns of the Valley Players, the church and the wine shop,” he said.