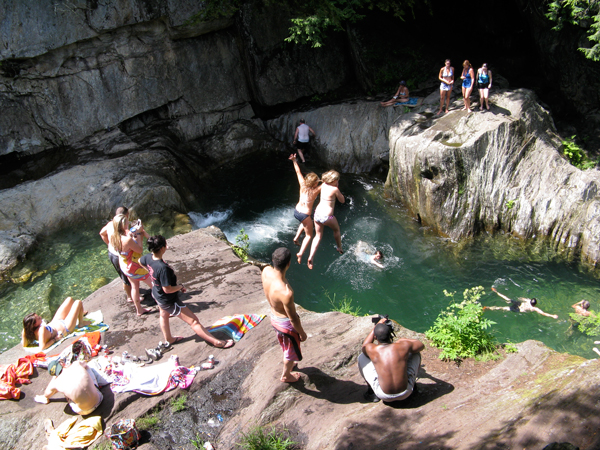 Popular swimming spot Warren Falls is faced with parking issues that could have serious safety repercussions, according to the Warren Select Board.

The Warren Select Board discussed the issue at their July 12 meeting. A few years ago, the United States Forest Service worked with the state and the town of Warren to design and construct a 15,000-square-foot gravel parking lot near the swimming hole.

This lot accommodates 30 vehicles, where previously the area had only a 3,000-square-foot dirt pull-off area for approximately 13 cars.

One Warren resident who lives across from the falls called the parking situation a “disaster,” and said, “No matter what [sign] you put up ... they’re going to park there.” He said that he has seen over 100 cars parked on the roadside and even during the week and in the winter when snowshoeing is an option, there are issues.

The biggest problem is for drivers – especially visitors who do not know the area well – traveling north around a bend, said a Warren resident. These drivers cannot see cars lined up on the shoulder.

Town administrator Cindi Hartshorn-Jones said that the U.S. Forest Service, which owns the land, originally had plans to construct a smaller lot in addition to the larger one, but that pottery and bone artifacts were found in the soil and the project could not proceed. “Their hands are tied,” she said.

Hartshorn-Jones also spoke with Amy Gamble of the Vermont Agency of Transportation (VTrans), who suggested that additional signs that prohibit parking with a risk of receiving a ticket be installed.

New signs could read “no parking, cars will be towed or ticketed,” the select board said. Chair Andy Cunningham said that the “nuisance ticket” could amount to $40 or $50. “To change people’s behavior, you have to give them an incentive,” he said.

Tickets could be issued by Vermont State Police, constables or sheriffs. One community member replied that the ticket price seemed “lofty for parking on a highway.”
Gamble did not think that towing cars parked on the roadside was a good idea, as a tow truck would have to park in the road to retrieve vehicles.

Vice chair Bob Ackland said that the town should speak with innkeepers and other lodging employees, who often send tourists to the falls. Visitors could be instructed not to park on the roadside.

Other community members, including a former member of the ambulance service, said that the lot is not designed to accommodate emergency vehicles, which need to gain entrance to the falls one to two times per year. These vehicles must block Route 100 to gain access.

“We used to be able to back a vehicle all the way back to the falls,” he said, “but now you can’t even get a four-wheeler in there.”

The select board did not directly address parking for emergency vehicles, but town administrator Cindi Hartshorn-Jones said that she, along with constable Jeff Campbell, a landowner who lives across from the falls and a member of the state police will attend an early August VTrans meeting. They will suggest the installation of signs that warn about the possibility of ticketing.

A community member commented that perhaps the town could install a yellow flashing light with a reduced speed limit from 40 miles per hour, before the road curves to the right when driving northbound. “I don’t see them [law enforcement] issuing parking tickets, but [they would issue] speeding tickets,” he said.

Hartshorn-Jones said that they will also request that a piece of privately-owned land near the existing lot, which used to be allotted for about 20 parked vehicles, be reopened. The landowner has given the town permission to do so.

“Let’s just see where it goes and try to push them [VTrans] a little bit to get some action,” Cunningham said.