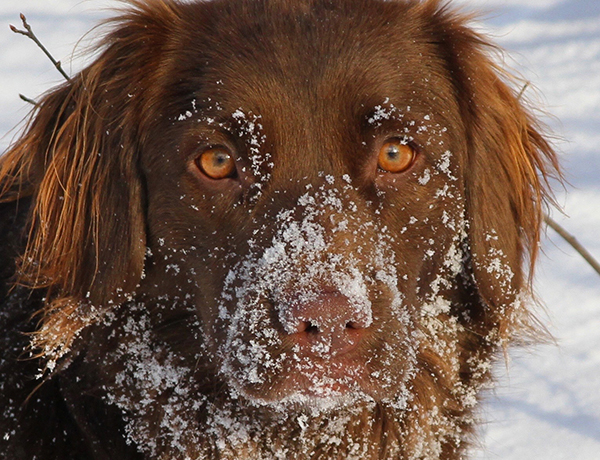 She started a dog blog while working in development for Green Mountain Valley School and for Valley Arts, both of which required a lot of photography.

“I was often asked if I had a blog or a website where people could see more of my work,” she said.

She’s a fan of the enormously popular Humans of New York blog, but rather than interview people about themselves, she asks people to talk about their dogs.

“It’s a vehicle to get people to open up. The blog has a portrait of the dog, but insights into the personalities of the humans, dogs and their relationship,” Silbernagel said.

Her blog, wagmorevt.com, features regular portraits and profiles of local dogs and often a written piece. She started out publishing one piece per week but found that it was a challenge to come up with a profile every week – even in a community as dog loving as The Valley.

“I started out by stopping people I knew and saying, ‘Hey I’m doing blog. Would you like to participate?’ Then people got referred and started coming to me. I’ve interviewed people about the importance of rescue: Golden Hugs Rescue, For the Love of Dogs and the Central Vermont Humane Society. What these people do is incredible,” she said.

For some interviews she gets down on the ground to take pictures of the dogs. One time a dog moved suddenly toward her, knocking her camera into her eye and giving her a black eye.

“Most people are so excited to tell their story. It’s been a lot of fun,” she said.

She was asked if she had a favorite dog/human interview and said it would be hard to pick.

“I interviewed Nancy Phillips and her border collies. Her whole reason for keeping sheep is to keep her dogs busy. That stands out,” Silbernagel said.

“I prepared a series of essay drafts for when I couldn’t get a dog profile. I still like doing the profiles, but the readers like the essays,” she said.

Her three dogs star in the blog regularly as well as on her Instagram account. Her dogs, Linus, Lucy and Charlie, are rescues from Golden Hugs Rescue. Charlie was a foster fail.

“Lucy is coming up on her ‘gotcha day.’ Linus we brought home a few months after we got Lucy because my husband needed a dog of his own. Charlie is Lucy’s dog. Charlie is our foster failure. We were only supposed to have him for a little while until he found his forever home. One night we were all snuggled in on the couch and I couldn’t imagine him not being there,” she said.

Silbernagel is from Minnesota and attended Skidmore College in Saratoga Springs. She returned to Minnesota where she earned a law degree. Her husband is from New Jersey and they have one son, Erik, who is in his second year at Hampshire College in Amherst, MA. He started at GMVS as a day student when he was in eighth grade when the family relocated to Fayston.

When she is not walking her dogs in the woods, Silbernagel will be working in Montpelier as second assistant clerk of the House.