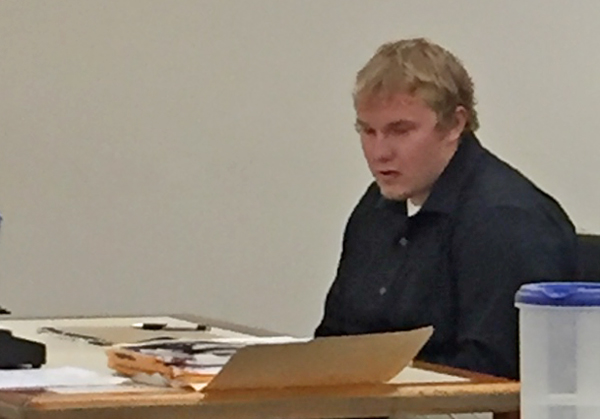 Judge John Pacht sentenced Jeremy Champney, 20, Moretown, to 90 days of house arrest, 200 hours of community service and two years of probation for his role in failing to call for help for 19-year-old Lily Stilwell, after she was paralyzed in a car accident in Moretown on October 14, 2016.

At the emotional August 22 hearing, Champney was also ordered to seek treatment for alcohol as well as participate in a reparative board.

The state asked for a 12- to 18-month jail sentence on the two charges (reckless endangerment and negligent driving) and defense attorney James Martino asked for 30 days on a work crew and two-year probation with home confinement, with a community service component.

Stilwell was a passenger in a car driven by Andrew Baird IV, 20, of Waitsfield, when the car crashed on Pony Farm Road in Moretown as they were on their way home from a party in Waitsfield where Andrew Wimble, 30, Waitsfield, provided beer. Champney and Dakota Griswold, 19, Waterbury, were also present and drinking beer.

After the accident Champney and Griswold, in a separate car, came upon the crash. Stilwell asked repeatedly for help and for her friends to call 911, but that didn’t happen until she had been moved by her feet and shoulders, first out of the car and onto the ground and then into Griswold’s car and transported to a Moretown residence. Only then did Champney call 911.

“If I have to sit in this chair for the rest of my life, it wouldn’t hurt Champney to sit in a jail cell for a while either,” she read.

Judge Pacht acknowledged Stilwell’s comments as well as those of State’s Attorney Scott Williams who said that “sometimes punishment is necessary.”

“At the last hearing, your honor spent time getting Champney to really own his behavior and the court should consider that in finally electing to punish him. His negligent operation subsequent to the accident showed disregard for public safety,” Williams said, referring to a negligent driving charge he incurred after speeding past a trooper and turning around, heading north on Route 100B only to take a high-speed turn onto River Road as what state police estimate to be approximately 70 miles an hour, according to affidavits.

“I want you to understand the respect I hold for you. I may not do what you want me to do. I look at you and your mother holding hands and the strength you’ve shown. It’s a powerful thing. Thank you for making this process so meaningful. I mean that for you, too, Ms. Rich,” he said referring to Stilwell’s mother Tina Rich.

“The statute requires me to look at the nature and circumstances of the event to determine what punishment is a deterrent and rehabilitative. Does jail time do more damage than help a community? Too often research shows that jail for people does that,” he continued.

“What I see is complicated, not to dismiss what he did, because that was wrong. One can’t blame him for creating the circumstances surrounding the event. The developing brain of 19- to 21-year-olds are not fully developed. Coming to an accident scene scared the daylights out of him. That’s part of what happened to him. It’s not an excuse, but it does happen. The decision-making part of the brain goes away,” Judge Pacht said.

He noted that what Champney did was cold, thoughtless and heartless and noted that he failed to get Stilwell the help she needed.

“But it was too long. He did end up making the phone call for help. But I can’t hold him responsible for the condition you’re in,” he said to a tearful Stilwell and her mother and friends, right before Rich erupted in anger and left the courtroom.

“I understand that this is not what you truly wanted. I don’t think this is the case that should be the focus of the state’s efforts,” he added, referring to upcoming hearings for Griswold and Baird. Griswold is charged with reckless endangerment, as is Baird, who is also charged with DUI with grievous bodily injury resulting. On September 6, Baird appears in court for a motion hearing at 2:15 p.m. Griswold’s next appearance is September 12 for a pretrial conference at 1:30 p.m.

Following the hearing Rich said that had they known the judge would reduce the plea that Champney agreed to when he pleaded guilty, they would not have agreed to settle the case. Stilwell said that she felt that Judge Pacht’s past experience as a defense attorney was evident in his work on the bench.