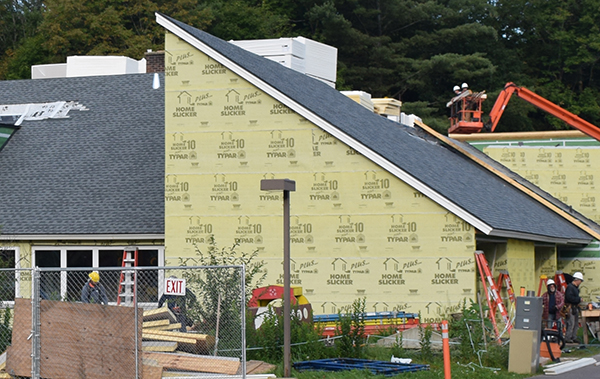 “We will do everything in our power to get the school open by Monday, September 11,” Washington West Supervisory Union Superintendent Brigid Nease said in an email to parents and the community.

As The Valley Reporter went to press on September 6, the Harwood Unified Union School District (HUUSD) Board was holding an emergency meeting to address the issue. Asked if Warren parents could exercise their right to school choice and move their children to another local elementary school now that school has started, Nease said that was not yet known.

She also said that she had ordered an independent certified review of the entire Warren Elementary School for mold. The Vermont Department of Health and the state Agency of Education have been notified. Air quality testing has also been ordered. Warren Elementary School underwent a mold abatement project two years ago, after a thorough inspection of the school found black mold. That inspection led to this summer’s construction project, which included the new roof.

Warren Elementary School is at the tail end of a $2.55 million renovation project that started this summer. The work entailed renovating the building envelope and improving the HVAC systems. The building envelope work included all new siding, insulation, roof, exterior windows and doors. The HVAC update included new duct work and a new electronic heating and air flow system to every room. The boiler was not replaced.

A faulty roof seam in that new roof caused flooding at Warren Elementary School on September 3, which led to school being canceled on Tuesday and Wednesday, September 5 and 6.

Principal Beth Peterson said the flooding occurred during that all-day rain event on Sunday when water pooled up around a roof seam and that seam breached into the building. The flooding pretty much ran the length of the building, she said, from front to back along that seam. Hallways on the first and second floor and several classrooms were impacted.

“It was a seam in the roof that was not properly installed. It wasn’t completed; only the first of four layers of roofing had been installed. But it still should not have breached even though it was only the first layer,” Peterson said.

She said that a school staff member had been in the building and noticed the flooding in a timely fashion and was able to get the appropriate people notified.
“We don’t think there was too much damage to stuff; mostly the water ran down the walls and pooled on the floor. So far, we don’t think we’ve lost any electronics. Some books and furniture got wet. We were lucky we caught it as it was happening,” she said.

The insurance company for the roofing subcontractor will be covering the cost of the remediation and any damage. Remediation efforts got underway on Sunday with shop vacs removing the standing water – which reached 4 inches deep in some corners of the building – and large industrial fans to dry things out.
Other remediation efforts are focused on investigating how much damage there may be behind the walls and under the floors, checking for mold associated with the recent flooding and checking for damage to lighting systems and fixtures.

“We’re still on track for getting the complete project completed by the end of September and without kids in the building, crews can work around the clock,” Peterson noted.

The roof was not finished due to an eight-week delay of an important building material for the roof that was required to be used for the 30- year warranty to be valid.

The opening of Warren Elementary School was already delayed by one day because, while the interior work was completed on time, teachers had no time to get in and set up their classrooms.

These additional days of closure mean Warren students have used the three spare days that are built in to their school calendar and more. At this point, Peterson said, students will have to make up lost days.

“And that is dependent on snow days as well,” she said. Peterson said it is possible to apply for a waiver from the state to avoid having to make up all the lost days but said such waivers are not easy to receive.