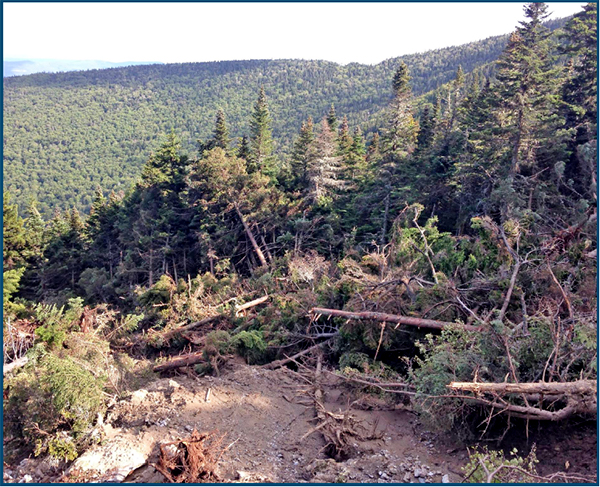 A Waitsfield man, Peter Stevenson, was the first to notice and then hike in to explore and photograph an extensive mudslide in the Slide Brook area of Fayston last week.

The slide occurred on August 24, he said, and he first noticed it when driving on Rolston Road in the morning when the sun was shining on the Slide Brook Basin between Sugarbush’s Lincoln Peak and Mount Ellen. The slide is also visible from the top of the North Lynx chairlift at Lincoln Peak.

The slide is clearly visible from Rolston Road and East Warren Road. The slide begins about 200 feet below the Long Trail near Cutts Peak. It is about 100 feet wide at the bottom where a jumble of trees and rocks are located. It is 40 feet wide at the top. Sugarbush Resort officials have been notified but haven’t been in to check it out yet. Sugarbush spokesperson John Bleh said the resort’s permits do not permit any activity in Slide Brook until November.

“We won’t be clearing it or anything this winter,” Bleh said.

Stevenson, an avid skier, has twice hiked in to the slide and has marked the way to it with blue surveyor’s tape. He has posted pictures and videos on Facebook, leading his friends to speculate about skiing the slide this winter. He hiked in from the Slide Brook Road.

This area of Fayston is known historically to be unstable and the name Slide Brook comes from a historical reference to the area as “slide off brook.” That name is referenced in the book The Early Years, Fayston, Vermont 1798-1898.  In a chapter that discusses slides on the eastern slopes of the Green Mountains, no fewer than four are referenced. Those paragraphs appear below.

“There have been several landslides on the eastern slope of the Green Mountains; though they may have started in Warren or Lincoln, they surely landed in Fayston.

“The first one was in 1812. The longest slide occurred June 28, 1827. There had been heavy rain for some days. The noise and roar of the slide was heard for miles. A party of a dozen men visited the place on the next Fourth of July and reported the length of the slide from the top to the turn 200 rods and from the turn to the lower end 280 rods; greatest width 24 rods. There was a jam of naked timber piled up at the lower end, 15 or 20 feet deep for a long distance. There was another one in 1840.

“The most remarkable slide was on July 14, 1897. After a copious shower which lasted the whole night and most of the early morning, a heavy, roaring sound was heard a long distance and for a long time. Those living near ‘slide off brook’ soon saw a tremendous mass of floating trees, rocks and mud coming down the stream. It cleared a wide channel in its course as it went on its way of destruction. Bridges, flumes and meadow land were swept away by its resistless current. Before the summer was over thousands of people from all about the country had visited its wonderful course.”