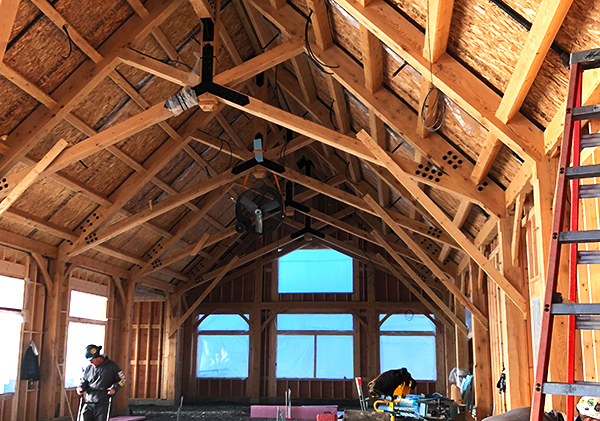 The 7.500-square-foot timber frame that Mad River Post and Beam has erected to house the Lawson’s Finest Liquids taproom and retail space is nearing completion at the Carroll Road site.

The frame features a clear span, scissor-truss design in which the timbers soar across the open ceiling, running east to west in the building without an accompanying north to south beam or any interior vertical support posts to hold them up – a feat achieved by adding steel plates to the timbers, Ramsey Orr of Mad River Post and Beam explained.

Visually the result is one of a soaring ceiling with the stark geometry of the timbers plain to see. In addition to the interior framing, Orr and his crew of four have framed in porches on three sides of the building.

Orr said that the bitter cold weather in December and January made it challenging to stay on track and meet the deadlines.

“But at 24 below zero – nothing starts and it’s hard on the crew. But now we have temporary heat in there and the framing of the main taproom is done,” he said.

He and his crew have been on site since mid-October and have spent a lot of time getting the timbers cut and engineered. The timbers are from Rutland and were milled in Hardwick. The rafters inside the building are 8 inches by 12 inches by 22 feet.

Company co-owner Karen Lawson took time this week to provide a quick tour of the project, leading the way to the taproom over sand laid down on the ice that is everywhere right now. Inside the taproom, workers were rolling gravel in preparation for pouring the concrete floor. She pointed out where taps and a bar would be, explaining where seating will be as well as the retail area and kitchen. Company offices will be on the west side of the taproom building.

While the taproom and retail buildings are being built, from the ground up (on the site of the former Valley Rent-All building), the brewery is going to be in the building at the south end of the site. In that building a frame was being built for a new floor that must be installed to support the weight of the brewing vats. There will be a viewing area for the public to watch the brewing take place. On the mezzanine level of the brewery will be company founder Sean Lawson’s office as well as that of the head brewer.

Lawson’s Finest currently employs five people, including Karen and Sean Lawson, and is ramping up for hiring additional staff in anticipation of a fall opening.

"While progress continues on the taproom and brewery construction, we’ve been hard at work preparing for the hiring of our new staff. When we open in autumn, we anticipate having 25 new staff hired to assist in all areas of operating the Lawson’s Finest taproom, retail store and brewery. Currently, we have job openings for the brewery operations director, finance and administration director, and sales and distribution manager. After this round of hiring, we’ll have another cohort of managers to interview and hire. All current and future job opportunities are posted on our website,” Karen Lawson said.