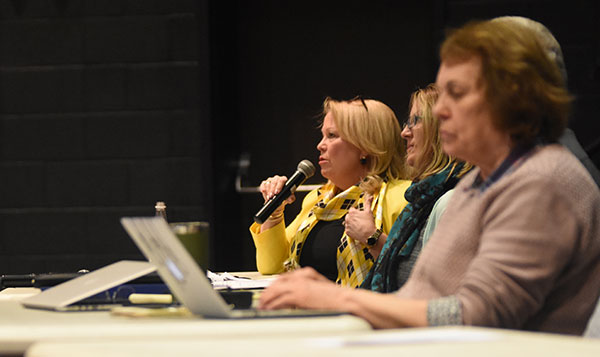 Residents agree that the Harwood Unified Union School District (HUUSD) should strive for equity in any district redesign, but how that goal is achieved is a much tougher question, especially when closing a school could be a deal breaker.

Superintendent Brigid Nease addressed parents and community members in the Harwood auditorium on Tuesday night, March 20, to explain her vision to community members. Nease and Michelle Baker, director of operations and finance for the HUUSD, sat for a two-and-a-half-hour question-and-answer session with over 100 community members. At issue are proposals that call for closing two local elementary schools and possibly sending all fifth- and sixth-graders to Crossett Brook Middle School.

Before accepting questions, Nease stressed that the current proposals are simply starting points and that nothing has been decided. Per the Act 46 articles that merged all local school boards into one, any school closure must be voted upon by the residents of that town.

“I applaud you for trying to integrate these kids so that there’s not that ‘your school, my school.’ We can all be one school. I like a lot of the things that are in your proposals. I like the equality among schools and trying to equalize us. My concern was the number of pupils per classroom,” Missy Semprebon, a parent of two high-schoolers and a first-grader in Waterbury, said.

Semprebon said that she is questioning whether to keep her first-grader in the public school. Her biggest worry is about larger class sizes, which might leave less time for one-on-one time in the classroom.

Valerie Bigelow, from Warren, asked whether or not the administration had considered moving all middle-schoolers, seventh- and eighth-graders into Crossett Brook. Bigelow said that the extra staff at Harwood would be freed up to focus on the high school and that the additional space could be used as the central offices or for vocational services.

Nease stressed, as she reiterated throughout the night, that the administration and the school board is at the very beginning of the redesign process. She explained to Bigelow that moving the middle school to Crossett Brook would be explored further. However, moving the seventh- and eighth-graders out would leave Harwood vastly underutilized, she said. Harwood would be left with only grades nine through 12, just over 400 students in a building that can accommodate over 800 students.

In order to increase the cost savings that would come out of a redesign, the buildings should be utilized at their capacities, Nease explained.

Some residents asked that more metrics be used apart from the financial gain of the redesign.

“We will not sustain the current state. I don’t think we will. The schools that we have today will not stay in their same configurations with their same offerings with tax breaks that our community will accept,” Nease said.

Kristen Rodgers, a Moretown parent with a son in Moretown Elementary, questioned what amount of thought the school board has put into the entire redesign.

Rodgers also noted that there are children in the school district that have challenges and asked how they are going to transition if they are making progress at one school and they have to move to a new place where they might regress.

Nease said that the administration is keenly aware of how the redesign will affect students. She also reiterated that the current state of affairs is not sustainable, and with the redesign Nease believes that the school district will maintain the same supports that are currently in place for all students.

Nease explained before the Q&A session that part of the reason that she is excited about a redesign, and the possible savings that it would create, is because it could free up the district to improve offerings districtwide, which is important to Nease. She explained that at around fourth grade, students should have a group like a sports team or a club that they feel connected to and where they can succeed.

Over the years, Harwood has been forced to cut programming and elementary schools have deferred maintenance to keep school budgets contained; Nease does not want to cut any more.

“I want us to start thinking really innovatively and say, well how do we bring our [enrollment] numbers back up again?” Dana Hudson, a parent in Waterbury, said.

Some parents asked whether two Valley elementary schools would be enough for all of The Valley’s elementary students. Nease explained that it would depend on the configuration that was chosen.

Nease also told parents that during her tenure Harwood Union High School has been ignored.

“I have been here for nine years and Harwood Union takes the backseat. Parents of students that are in the elementary schools don’t really know oftentimes until your students get to Harwood, and that’s when the conversations start about, well, why don’t we have this, why don’t we have that, why can’t we do this? Other high schools across the state that are considered top-tier schools offer more than we do,” Nease said.

Parents also brought up issues surrounding longer bus rides for fifth- and sixth-graders, if they are sent to Crossett Brook and whether or not per pupil spending would decrease given the reconfiguration.

Nease explained that the number of pupils in the district is largely out of her and the school board’s control, but the school board does have control of its budget and, thus, per pupil expenditures.

Jonathan Clough, a parent from Warren, asked Nease to stop claiming that 80 percent of the school district merged in order to save money. Clough claims that the vote was not presented as a choice because the state would have merged the districts in four years anyway.

“Please stop saying 80 to 90 percent of people voted because we were desperate to cut costs. … It wasn’t really a fair vote,” Clough said.

Nease said that she respectfully disagrees. The goals of the merged HUUSD Board were presented before the vote in the articles of agreement and the vote passed with 80 percent to 20 percent. Saving money does not have to include closing schools, Nease said, adding that if there is another way to save then that would be the decision.

The community engagement committee plans to hold more forums with community members throughout the redesign process. One resident in attendance Tuesday asked that the administration be ready to discuss the Act 46 articles of agreement.

The full community forum can be viewed at MRVTV.com.