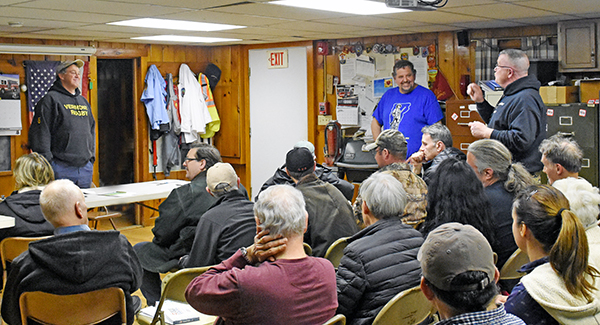 State Representative Ed Read, I-Fayston, recently voted for Act 94, which made Vermont’s gun regulations some of the strictest in the country. Some people might think that just after the vote would be poor timing to meet a local gun rights group, but that’s exactly what Read did.

On Friday, April 13, Read visited Washington County’s chapter of Gun Owners of Vermont in Warren, where he was grilled with questions regarding his vote and commended for being brave enough to enter the room.

“With everything that’s just happened some people were questioning whether you were going to show up,” Bill Robinson, head of the chapter, said.

Read, who was appointed to fill Adam Greshin’s seat for the remainder of that term, introduced himself telling the group that he wanted to join the Vermont House of Representatives to help small, rural businesses.

Greshin vacated his seat in order to become Governor Scott’s budget commissioner last summer. Read plans to run for the seat for the first time in November.

Though Read’s passion is improving the rural economy and small businesses, he explained that most of his first term was spent on social issues, such as gun control.

With that the group was thrust into a spirited debate around the topic.

“It is not a hardship. S.55 is not going to cause anybody a hardship. It is not messing up with Vermont’s culture. … Frankly most of the gun owners I’ve talked to, in fact the vast majority of them, are fine with it,” Read said, which sparked the two parties’ first disagreement.

Many voices in the crowd said that it simply was not true. One woman asked Read about the small businesses that manufacture the high-capacity magazines that can no longer sell them in Vermont.

“I hear two of those businesses are moving out of state,” she said.

Read countered that he read that one business was considering moving at some point.

Read then spoke about the ability of law enforcement officers to confiscate someone’s weapon where they deem it appropriate.

“So the state confiscates somebody’s weapon, but for some reason, somewhere down the road that person can then reacquire his weapons or her weapons. However, the problem I see in this particular instance is that a lot of people, they have to go back and buy their own property,” Gene Bifano, Warren, said.

Another resident claimed that a cop can now be the de facto judge, jury and executioner to decide if someone is mentally unfit to have a weapon.

Another attendee agreed. “The problem I have is that you have someone who has not been convicted of anything and their weapons are confiscated, and now I’m hearing they have to pay to get them back?” she said.

Another issue that the members of Gun Owners of Vermont had was that the law restricts the transfer of weapons, outside of one’s family. Now, if one gun owner wishes to transfer ownership of their weapon to another owner, they must go to a licensed dealer in order to facilitate the deal and run a background check.

“The time, the cost, that’s a burden,” one member said.

“Two days ago I used to be able to say, you know, I know him from [Gun Owners of Vermont] and I know him well enough to feel comfortable that he’s not going to be shooting people up. I can sell it to him, no big deal. Now I’ve got to find the FFL (Federally Firearm License). I’ve got to pay whatever they choose to charge me. I’ve already heard the rumors anyway that the people will be charging exorbitant amounts,” one woman said.

She also explained that she has no intentions of selling any of her guns, but she is thinking of her fellow gun owners who cannot afford the cost and do not have the time to jump through all of those hoops.

One resident also explained to Read that many gun owners simply would not follow the new regulation, and that now law-abiding gun owners could be deemed criminals. To which, Read could only respond by asking them to follow it.

One member of the group brought up the fact that every time a gun is directed through a federally licensed dealer they can track it.

“Let’s not forget an important issue: Every time this goes to RNL, or to whoever, the federal firearms dealer, that serial number for that firearm gets recorded and entered into a database. So that’s registration of your firearms,” he said, adding, “We all know all of these anti-gun people are saying this is a good first start, so registration leads to confiscation.”

Another gun owner said that he did not mind the registration. He mentioned that he had his guns stolen and had they been registered, he would have been able to track them possibly.

Myriad other issues arose throughout the night: the erosion of personal liberties, competition shooting, which included high-capacity magazines, and the transfer of firearms between family members.

Read also touched on the topic that spurred Vermont’s gun legislation in the first place. Some members in attendance were upset that the bill was in response to an incident, the Stoneman Douglas shooting in Parkland, FL.

Read reiterated that his vote was never an emotional one; he decided based on its merits.  He also pointed out that if the new regulations are able to stop one mass shooting, then they are worth it.

One member of the group suggested that the legislation is a political solution to a societal problem and said that the brunt of the bills is on the backs of law-abiding gun owners.

“I disagree. If one person doesn’t get a gun, it’s worth it,” Read said.

“If you save one life, then it’s worth it?” asked that member of the group.

“If you stop one mass shooting at a school, you’re goddamn right it’s worth it,” Read responded.

“I prefer tumultuous freedom over peaceful servitude,” the member shot back.