“The question everyone wants to know is ‘when will you open?’ And our answer is always ‘when we’re ready!’”  Sean Lawson of Lawson’s Finest Liquids, told a crowd gathered for  tours and tastes in his new Waitsfield brewery and taproom this week.

Some 80-plus business owners, community members and others showed up for the event, which was hosted by the Mad River Valley Chamber of Commerce and Lawson’s Finest on September 18.

People were in high spirits as they got their first glimpse of the taproom which features a soaring timber frame crafted by Mad River Post and Beam, floor to ceiling chimney and two-sided fireplace, a custom bar and mural and gorgeous Vermont slate and marble throughout.

Business owners Sean and Karen Lawson greeted their guests, taking many questions about when they would open and also how they were feeling.

Those present were treated to two tours, one of the brewery and one of the taproom, retail store and offices.  Leading the brewery tour, Sean Lawson paused outside the building that used to house Valley Rent-All’s tent business which has been reconstructed as the brewery. Lawson pointed out grain bins, the wastewater treatment area and made sure to point out that the facility is using water from Waitsfield’s municipal water system.

“The Waitsfield water comes right down off Scrag Mountain to us. We’re testing our first batch of beer through the system today,” he said, leading the way into the facility featuring a canning line that can produce 100 cans a minute.

“Faster than you can drink it,” Lawson joked. 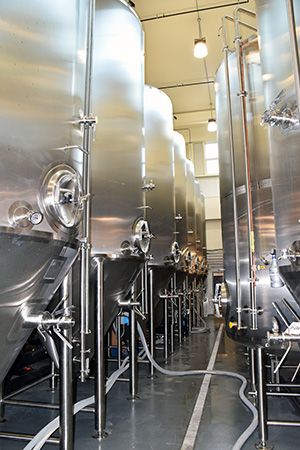 There are eight, 80-barrel brewing tanks, roughly the size of small space ships in the brewery. Each 80-barrel tank (and they are English barrels) holds 2,400 gallons or 800 cases of 16 ounce cans. During the tour, Lawson added the first hops to the first batch in the new system to applause and cheers.

Above the canning line is a mezzanine area were brewing operations and an employee lounge are located.

Karen Lawson handled tours of the retail space, taproom and company offices. She said that she and Sean had opted for and sought as many local and Vermont products as possible when designing the facility including light fixtures crafted by Conant Custom Brass, Vermont slate on the floors and Vermont Verde marble from the Hancock/Rochester quarry. Warren Pieces made the bar and the tables in the tasting area.

There will be 15-minute parking spaces for retail customers and a beer garden surrounding the facility, which is interconnected to pedestrian walkways via the Mad River Path and Waitsfield’s sidewalks.

There’s going to be a kids’ play area with old-style video games beyond the fireplace. The company offices are sleek and modern with a break room along the back (western) wall of the building.

As all tour groups regrouped in the taproom, beer was served along with charcuterie, cheese and more from Mad River Taste Place. The mood was festive and many toasts were offered. The sound baffling boards that run horizontally across the ceiling help make it possible to hear people speak.

In brief remarks, Sean Lawson asked how a home brewer could end up where he was standing on Tuesday night.

“We’re most excited about the opportunity to create economic vitality here in the Mad River Valley.  We have 15 employees right now. Not too long ago, we had four to five and that included Karen and myself,” he said. 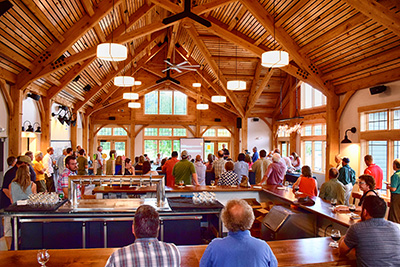 Lawson’s Finest will be open noon to 7 p.m., seven days a week, with the exception of holidays like Thanksgiving, Christmas, New Year’s Day and the Fourth of July. In addition to beer they will serve hard cider, wine, soft drinks, tasting plates and warm pretzels.

“We’re hoping to pick up the bottom of the dip here in The Valley in terms of beer tourism,” Lawson said.

They will use traffic control officers at the intersection of Carroll Road and Route 100 at peak times, as needed. Given that the taproom capacity is 80 seats, plus the beer garden, people will be encouraged to wander the Mad River Path in the area, in particular Hosford Highway, named in honor of Charlie Hosford, Waitsfield, who was one of the most visible faces of the volunteer construction effort that took place linking the Mad River Green Shopping Center and Irasville to Carroll Road in the blistering heat this summer. Hosford received applause and cheers for his work this summer.

Look for Lawson’s Finest Liquids to open this fall, “when they’re ready.”