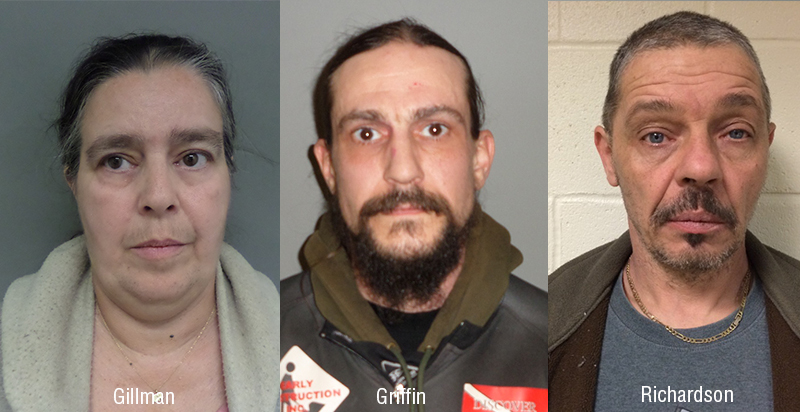 Vermont State Police have arrested two and are seeking a third person charged with a rash of breaking and entering crimes in The Valley, Rochester and Central Vermont.  Trooper Isaac Merriam reported that on August 31 Brian Richardson, 53 of Rochester, Lynn Gilman, 52 of Rochester and Scott Griffin, 40 of Waitsfield are charged with multiple crimes.

This summer, troopers from the Vermont State Police Middlesex Barracks received an increased number of reports of burglaries in the towns of Waitsfield, Warren, Fayston and Roxbury. The victims have included private residences, businesses and government buildings such as the Warren Town Offices. Items reported stolen included firearms, jewelry, gas cans, tools, antiques and cash.

An ongoing investigation determined Lynn Gilman, Scott Griffin and Brian Richardson were working together to burglarize these locations in order to sell items for cash, which they then used to purchase drugs. Trooper Merriam said that some of the stolen items were discovered in a pawnshop and that further investigation revealed that the items were linked to Gilman’s driver’s license.

The investigation led to a court-ordered search Monday, Aug. 20,at the home of Richardson and Gilman in the town of Rochester. Law enforcement recovered numerous items at the residence that were reported stolen in the burglary spree, but other items, such as firearms and jewelry, were not located.

On August 31, the Vermont State Police arrested Gilman and Griffin in connection with the burglaries. Richardson was not located. On Thursday, Sept. 20, the Criminal Division of Vermont Superior Court issued a warrant for Richardson’s arrest. Richardson has been sighted in the Waitsfield area within the past week, but his current location is unknown.

Anyone with information about Richardson’s whereabouts or the incidents in question is asked to call Trooper Isaac Merriam at the Middlesex Barracks at 802-229-9191.

Gilman and Griffin were arraigned Aug. 31 in Barre and pleaded not guilty. Griffin was ordered jailed on $25,000 bail. Gilman was released on conditions.