Harwood Unified Union School District (HUUSD) Board members reviewed 27 district configuration models at the last board meeting and cut that number by more than half by the meeting’s adjournment.

At the HUUSD Board’s last meeting on June 6 members discussed school district configuration in depth. The board meeting started off with reports from district director of finance and operations Michelle Baker and director of facilities Ray Daigle. Baker and Daigle gave in-depth analysis on the cost to maintain each of the district’s seven buildings and what potential each has for adding students or remodeling.

Daigle gave a slideshow highlighting each school building’s assets and what could be added to accommodate additional students, including what sites could not be adapted for greater capacity.

After hearing both presentations, the board reviewed 27 pre-K to 12 scenarios with the goal of having three to five models by the end of the June 12 meeting. In a two-round voting system, board members were asked to view each of the 27 models, first to pick scenarios they would like voted out and then to vote again for their top three scenarios to move forward.

Some board members were wary of voting out scenarios prematurely and motioned for the administrative team to look further into each configuration. During discussion, other board members agreed that the information that is needed to determine if adding to a school is both possible and financially cost effective is critical; the motion to hold off voting out scenarios was defeated.

Board members were also asked to share their list of top four priorities associated with what they thought were important to students' education and the district overall. Many board members agreed with budget- and money-based priorities.

“We talk a lot about equity in programming and making sure that the less fortunate among us have equal opportunities, and that seems to get a lot of weight in this room … but we seem less concerned with the less fortunate among us, the same ones that can’t afford that $300 on their tax bill and that’s the difference in their kids participating in a sport or being able to rent an instrument or being able to have a Christmas. … We are among the highest per pupil spending in the state and that is irresponsible,” said board representative James Grace, Waterbury.

Board members asked Brigid Nease, HUUSD superintendent, which of the scenarios were a no-go for her and her administrative team. Nease said in a report that was delivered earlier that day that her team felt any model that split up levels five through eight would not be supported.

Nease was also not in favor of fitting all Valley kindergarten through grade six students into two Valley elementary schools. Nease said that some of the configurations would have challenges and would not be feasible as there would be high construction costs to renovate and add to existing buildings. The cost of construction would not offset the savings that the district would need to support additional students. Nease said from an educational quality standpoint she could rule out nine options due to the school pedagogies.

After board members heard from Nease, they were asked to place three orange dots on scenarios that they would like to advance and discuss at their next meeting. Upon completing the task, Grace made a motion that any scenarios without an orange dot be eliminated from discussion. The board voted unanimously to remove any existing configurations with no orange dots for consideration leaving A, B, C, D, E, G, P, R, S, V (see chart). 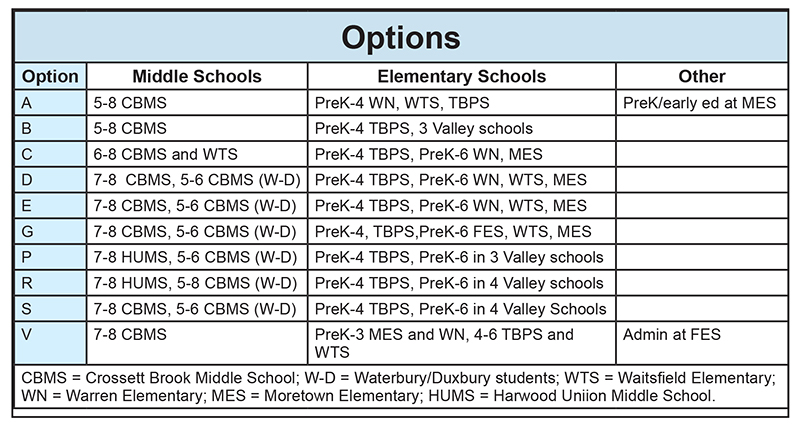