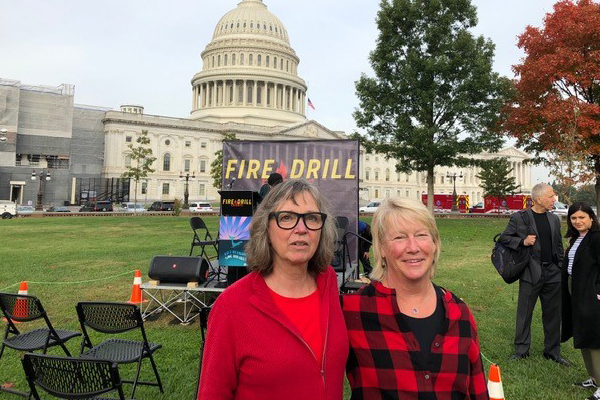 On Thursday, October 24, Kathy Mehuron (Waitsfield) and Alice Rodgers (Warren) traveled to Washington, DC, to participate in a Fire Drill Friday demonstration. Held on the Capitol’s front lawn, Fire Drill Fridays were conceived by Jane Fonda to use the power of civic engagement and civil disobedience to advocate for climate justice and agitate for the governmental and personal action needed to stem the tide of climate change. Inspired by activist Greta Thunberg, Fonda created Fire Drill Fridays to raise awareness and inspire others to take action, including practicing civil disobedience. Holding true to her promise in a Washington Post interview, Fonda was arrested again on October 25 for the third consecutive week of Fire Drill Fridays. Actor Ted Danson and 22 other protestors were also arrested.

This week’s Fire Drill Friday focused on the theme “Oceans Can’t Wait.” Participants attending the rally heard from experts and scientists about why oceans are such an important part of the fight for the climate. Rodgers noted, “I am acutely aware of sea level rise, warming ocean temperatures and just how fragile the marine ecosystem is. But it absolutely broke my heart to hear about what happens to sea turtles when they ingest plastic. ... They are truly the ‘canaries in a coal mine’ and their tragedy will become ours if we don’t take action.”

Mehuron said, “All my life I’ve watched change happen because civil disobedience brought awareness to crucial issues. Civil rights, women’s rights, LBGTQ rights, it just goes on. The environment is important to me. I have three sons I’m leaving this world to. Though I live in this bucolic state of Vermont, I grew up in New Jersey and know perfectly well extreme effects from the refining and use of fossil fuels.”

Mehuron and Rodgers are planning a return to Washington, DC, to participate in the Fire Drill Friday scheduled for December 13. They are organizing a contingent of Vermonters to join them. Rodgers and Mehuron agree that this lesson is best taught through experiencing, firsthand, democracy in action.

The Vermont contingent will travel to Washington, DC, via Amtrak on December 12. Those interested in participating or who want information may contact Mehuron at 802-496-2296.