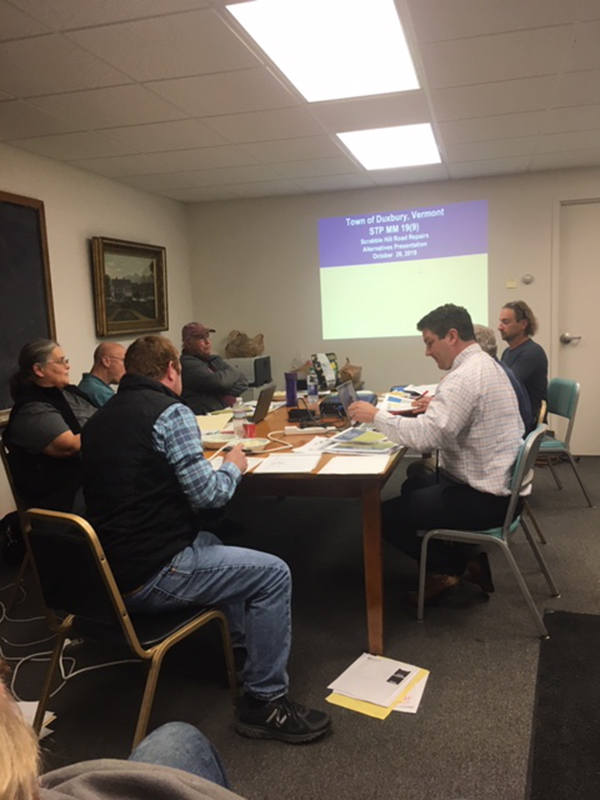 Scrabble Hill Road has seen many episodes when excessive water runoff washes out the road, destroys ditches and culverts and pushes the road over a bank on one side of the road. The issue has been ongoing for years.

The team went over costs including roadside ditches and culverts, culvert channel and hillside stabilization and roadway reconstruction totaling $654,000. Project development phases such as preliminary engineering and construction, construction engineers and municipal project management, including the $654,000, bring the total to $1,008,700. Eighty percent of this project would be state funded and 20 percent would be town funded. The town has already agreed to commit funding to this project.

Analyses have been performed by DuBois & King that follow the VTrans hydraulics manual and have used computer-aided models to help. The DuBois & King team looked at the soils that come off the bank from the top of Scrabble Hill onto the roadway; the team also saw which way water ran down the hill and which culverts it flowed into.

The team looked at increasing existing ditch sizes, increasing culvert sizes and adding new culverts to reduce the amount of water that goes into existing inlets and ditches. The team looked at designing culverts and ditches with an overflow weir on the inlet of a culvert to control when water flows downstream to reduce the probability of water flowing and washing out Scrabble Hill Road as it has done for years.

Scrabble Hill Road has three culverts, one 18 feet, one 24 feet and one 48 feet. The team would like to upsize two of the culverts to 48 feet and retain the third at 48 feet. Additionally, the team proposed increasing the size and depth of the roadway ditches along the project’s length. The ditches would also be stabilized with 2 feet of stone fill, type II. The team would construct overflow weirs at the culvert inlets and install reinforced concrete headwalls at each culvert.

After reviewing what would be done to work with traffic during this project, the team went over other alternatives. These were the inclusion of drainage improvements along Mountainview Road, installation of a new cross culvert on Scrabble Hill adjacent to Mountainview Road, increased ditch depth for greater water flow and the inclusion of retaining wall systems to negate right-of-way impacts.

The Duxbury Select Board also hosted a bond hearing meeting at Crossett Brook Middle School (CBMS) on Tuesday, October 29. This meeting was a public information hearing on the bond issue proposition. There will be Australian ballot voting from 7 a.m. to 7 p.m. at a special Town Meeting on November 5, 2019, at CBMS.

The bond vote is for the town of Duxbury to not exceed the amount of $300,000 to be issued to finance capital improvements to the town highway garage. The improvements include reinforcing the current structure, replacing the roof, wall panels and overhead doors as well as electrical upgrades.