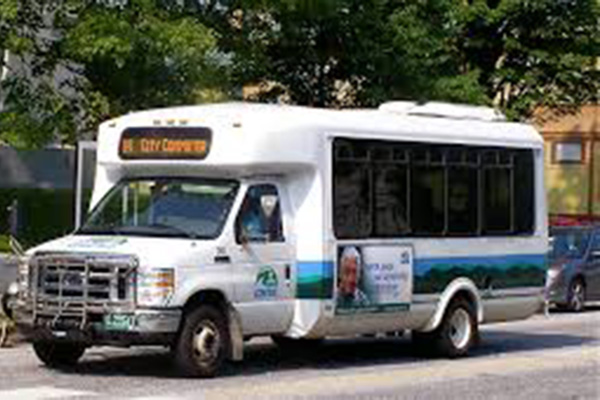 From Lawson’s to Sugarbush, Mehuron’s to the Mad River Valley Health Center, The Valley has many services to offer. If you can get there, that is. According to a 2017 rural transportation review from the American Public Transportation Association, without adequate public transportation small towns risk both social and economic stagnation. Public transportation is important for small-town residents, who, like all people, need access to social events, retail shopping, medical facilities, jobs and schools. For towns without public transportation, lengthy travel distances limit walkability, ultimately limiting town services access only to those who can drive.

During the Mad River Valley Planning District meeting on October 17, members discussed the fate of public transportation in The Valley, while commenting on changes to the Green Mountain Transit (GMT) system. Last year, GMT had two main buses running during the winter months. The first was the Valley Floor bus, which ran seven days a week from 7 a.m. to 6 p.m., starting at Lincoln Peak and turning around at the north end of Waitsfield, near Kenyon’s. The second was the Saturday Evening Service, an on-demand bus that bus riders could call for a pickup anytime between 5 p.m. and 2 a.m. on Saturday nights and special holidays.

The challenge with the Saturday Evening Service bus was that many of the calls happened at the same time, forcing bus riders to endure long waiting periods. The challenge with the Valley Floor bus was that it only stopped in Waitsfield Village in one direction, forcing riders to go all the way to Sugarbush and down again just to get back uptown. This year, GMT is changing both routes to make them more convenient to bus riders.

Improvements to the Saturday Evening Service include introducing a second bus and running these buses on a fixed route. The fixed route means bus riders can no longer call in and request an off-route pickup on demand. However, they can still call in a deviation to the route 24 hours in advance, as long as that deviation is less than three-fourths of a mile off the route.

VALLEY FLOOR TO BE IMPROVED

The daytime Valley Floor route will be improved by incorporating new and more frequent stops. Specifically, the bus will increase its activity in Irasville, the Mad River Green Shops and the senior center, stopping both ways. Also, instead of turning around by Kenyon’s, it will turn around at the Mad River Valley Health Center, making the route more convenient for seniors.

The daytime Valley Floor route is still free. However, the improvements to the Saturday Evening Service will come at a cost. For the Saturday Evening Service, the price will be $3 for one ride, $5 for a night, and $35 for a season pass. Planning district steering members were curious about this cost imposition: “Do they collect cash? Will you have to buy cards? How does that work?” asked Don Simonini, member of the Fayston Planning Commission.

“There’s an app for that,” said Margo Wade, representative to the steering committee and director of planning and compliance at Sugarbush. Token Transit is a free app that bus riders can use to pay for tickets. The process is simple: Riders buy the ticket on the app and show the driver their phone when they board the bus. For those who are not smartphone savants, not to worry: The bus drivers also take cash.

Another app has recently been incorporated into the GMT system as well. Transit is an app that allows riders to track the bus’s location at any given time. This real-time bus-tracking app is part of a statewide effort to improve public transportation in Vermont. Vermont purchased the software for deployment to the whole state. It’s an experiment for all Vermonters, not just a local GMT trial.

“The software is much more reliable than it was in the past. This is a vast improvement,” said Joshua Schwartz, executive director of the Mad River Valley Planning District. During the meeting, he noted that apps can even track where people board and off-board the bus, making it easier to design convenient bus routes for the whole community.

SERVING THE COMMUNITY AT LARGE?

But is this bus system really serving the community at large? As of now, the bus operates only during the ski season. Will future GMT routes run year-round or include transit for those who need connecting bus access to other places, like Montpelier or Waterbury?

“We are looking toward tri-town transportation,” said Schwartz, commenting on the future of public transportation in The Valley. In a follow-up interview, Schwartz mentioned that there has been interest in a commuter bus beyond the winter service within The Valley, as well as a bus that operates year-round. “But when there isn’t density, rural public transportation doesn’t work so well. We have commuters both in and out of The Valley. There are needs in both directions. But do we have the density?”

For those who want to chime in on the issue of public transportation in The Valley, there are Mad River Valley Transportation Advisory Committee meetings held on the second Wednesday of the every month at the General Wait House. The schedule is available at mrvpd.org. These meetings are open to the public and have helped in bringing the new, app-enhanced bus route with more reliable and convenient stops that bus riders will be enjoying this winter.