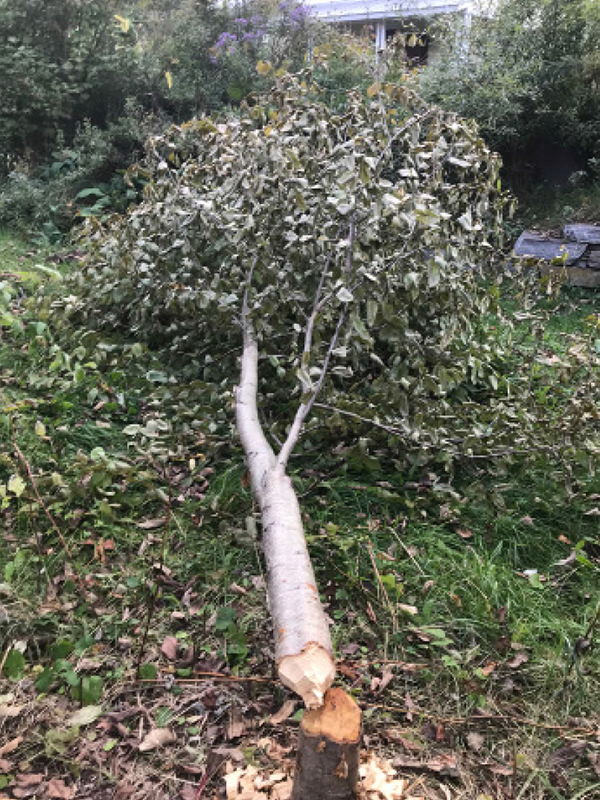 Since 1970 Dorothy Tod has lived in Warren on 1 acre in the Mad River flood plain, along with a substantial knotweed plantation. She’s been badly flooded twice, in 1998 and 2011. After Irene, the 18 inches of sediment that covered the entire acre was gathered to create a fluvial mitigation, permaculture, medicinal kitchen garden, i.e., a berm off the kitchen between the house and the river.

She worked with Mark Krawczyk, of Keyline Vermont, to design and install the permaculture riparian buffer along the 450 feet of river frontage.

“We planted silver maple, red maple, red oak, black walnut, black birch, black cherry, black locust, butternut, linden, dogwood, elderberry, service berry, nanny berry, winterberry, high bush cranberry, witch hazel, alder, willow, slippery elm, hawthorn, cramp bark and seaberry. We also installed an irrigation system and put wire around most of the trees to ensure success. This was all planted in an area of dense knotweed and for the past eight years, I have been diligently scything the knotweed four times a year to reduce its footprint and keep it from engulfing the plantings,” Tod said.

This year in late September, a beaver dam in Granville Gulf was removed and about that same time Tod looked out her bedroom window and realized she could now see the river.

“On closer inspection I realized my little black birch, now 4 inches in diameter, was lying on the ground, with a few branches chewed off. Was this the work of a displaced beaver? Was he/she able to immediately size up all my resources and realize the ‘riparian buffet’ could easily provide all the materials for dam, house and winter food?” Tod pondered.

“I regularly paddle at Blueberry Lake and one fall I keyed out 14 different shrubs and barks in a beaver cache up against the bank. I noted both the nutritional and medicinal qualities inherent in their selections, which prompted me to be curious about the range of this beaver’s palate. I walked the length of my plantings, observing what they took. Most of the trees had wire protection, but not the black birch, alas, and the dogwoods, willows and alders that I planted were now gone or severely damaged. Also many ashes, sumac, poplars and an apple that self planted were gone. The brambles, blackberry and raspberry are greatly thinned out. Every day I am wrapping more wire after ever more assaults – on a big yard apple, the witch hazel and many more trees. They even took half of my burn pile. And they have showed no interest in the invasives – knotweed, honeysuckle and burning bush,” Tod continued.

She says the beaver dam is tucked or hollowed into the side of the bank. She regularly plants willow and dogwood cuttings and spread seeds – Joe Pye weed, St. John’s wort and sedges – on the banks close to the water line to keep the banks from eroding. Now the banks are all exposed dirt, beaver slides and construction debris.

“Then came the Halloween night flooding. The water rose to the top of the bank and took out both the dam and the house. There are now big holes in the bank where they hollowed out rooms. Where are they now? I did see their footprints in the sand when the water level went down, near their house site. Are they thinking of rebuilding? I don’t think my riparian buffet can support another round,” Tod said.