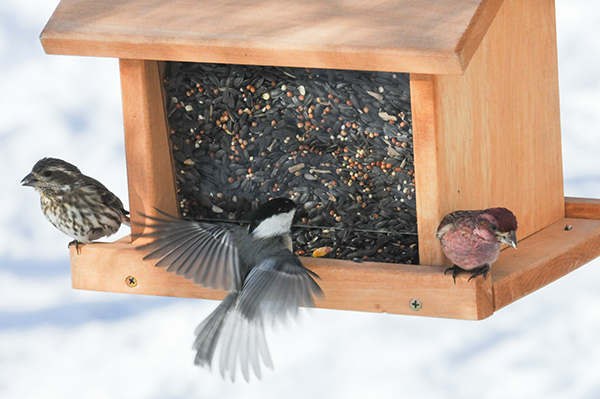 “Winter feeding is an opportunity to witness first-hand the array of bird life found near our homes,” said Doug Morin, Vermont Fish and Wildlife’s bird project leader.  “But, in doing so, we need to wait until early December when most of Vermont’s black bears are normally in their dens.”

“With the first snowfall of the year blanketing the Green Mountain Audubon Center here in Huntington, the urge to put out our feeders is strong,” said Audubon Vermont Education Program Coordinator Debbie Archer, “but we urge folks to follow the recommendations from Vermont Fish and Wildlife to wait on putting out feeders to protect the bears that are thriving in Vermont.”

Vermont’s bear biologist, Forrest Hammond, says the availability of fall foods is the most important factor determining when bears go into their dens.  “Pregnant sows tend to den earlier than the rest of the bear population,” said Hammond, “but, we urge folks who are feeding birds to be vigilant for signs of bears because they can re-emerge for short feeding forays if there is a period of warm weather.  If you see bear tracks or bears are raiding bird feeders in your area, you need to take the feeders down until later.”

Hammond points out that bears are especially attracted to black oil sunflower seed and suet, and that they can smell both from very long distances.  He also adds that a bear that learns to get food from people will continue to do so, potentially leading to property damage and dangerous encounters with people which can result in the bear’s demise.