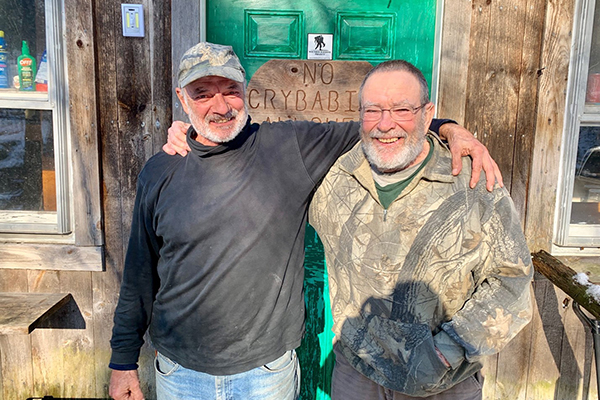 About a mile up North Fayston Road, there’s a hunters’ cabin with a sign on the front door that reads “NO CRYBABIES ALLOWED.” Outside, the snow that’s fallen off the slanted roof provides a perfect cooler for the dozens of beer cases that rest against the side of the cabin. These hunters need the frigid outdoors as a refrigerator anyway: The cabin has no electricity, no running water.

I walked into the cabin to find multiple pairs of eyes staring back at me, most of which belonged to mounted deer heads. The two pairs of human eyes I saw belonged to Mike Mackenzie, one of the original founders of the camp, and John Dezotelle, a loyal deer-camp buddy. The rest of the gang was out hunting that day.

We settled down at the long dining table at the right half of the cabin. The entire left half of the cabin was filled with summer-camp-style triple bunks. There was a loft with cots on top. Fifteen beds at least.

“We’ve been doing this for 51 years,” said Mackenzie. “My father, my older brother and myself were the original owners of the camp.” Mackenzie is from Colchester, Vermont. He and his family used to go to Fayston by car to hunt. That’s how they got their eyes on this place. Eventually, they found the 3/4 of an acre on which to build the cabin. The land cost $500. The current cabin, which was built after the snowstorm of 1986 that destroyed the first one, cost $6,000 for the whole setup, woodstove and all.

A few times a year, the Mackenzie family and a few friends come for 10 to 11 days at a time to hunt and to be together. “It’s really a family reunion. Everybody hunts,” said Mackenzie. The regulars include himself, his brother, his three cousins, his sons, his brother’s sons, his cousin’s sons and their friends. These guys are from everywhere from Florida to Washington state. At the reunion last weekend, 16 people showed up. “We eat well, we play hard and we hunt hard,” said Mackenzie.

For these men, hunting is not just a sport but a tradition. “I started hunting when I was 14 years old. My dad got me hooked. He would go off to camp and we couldn't wait for him to come back to hear the stories and the tales, of the deer that he saw, of the things that happened at camp. Once it’s in your blood, it stays there. It’s a great tradition,” said Mackenzie.

Today, there are few camps like this in Vermont. Many hunters go out of state or they simply do a day hunt. “Here we stay for 11 days at a time. And, as you can see, we’ve had some luck through the years,” said Mackenzie, pointing to the glassy-eyed deer overhead.

Deer camp is a treat for these guys and they work together to make it a treat for themselves. “We don’t just eat beans and hot dogs and hamburgers. We’ve got some excellent cooks here. Everyone takes a night for supper-meal,” said Mackenzie. There was a laminated menu on the table. That night’s dish: chili lime Brussels sprouts. And breakfast? Options included French toast and poached eggs.

Fayston is a great location for hunters because of the access to the woods. There are very few no-hunting signs. “We’ve been here for so long that most of the locals consider us locals. We also visit a lot of the landowners of lands that we hunt on and get their permission,” said Mackenzie.

However, just because there are 16 men hunting in the woods on a given day, that doesn’t mean scores of deer are dying. Even with good strategy and planning, it’s hard to get a deer. “Over 50 years, we might not quite average two deers a season. There’s a lot more hunters than there are deer. The deer have a great sense of smell. When you go out and hunt you try to be aware of how the wind is blowing. You want to make sure that you’re downwind so the deer can’t pick up your scent. You need to be quiet. Do scouting beforehand. You need to know the lay of the land. You need to be a woodsman, know how to read a compass.”

While hunting experience is important, it’s something else entirely keeping the camp going strong: camaraderie. “We’ve got four guys a year or two away from 80 years old. Three guys in their 60s. Two or three in their 50s. Two or three in their 30s. And we all get along. I don’t think there's ever been an angry word in this camp,” said Mackenzie. “If someone’s got a chore to do, one or two guys jump in and help. We all show up in November to cut and stack wood, make repairs, get ready for the season. That’s what we do that many other camps don’t. Everybody knows they’ve got skin in this place. Everybody here owns the camp. There’s no animosity at all here. It’s all love. A lot of love.”

John Dezotelle agreed that deer camp is really about the camaraderie. “What do you think happens on the first day when everyone gets here?” he asked. “The Friday before deer season. A big day. People are coming from Vancouver, Florida, California. They haven’t seen each other all year. The place is packed. What do you think happens?” he asked again. I didn’t know what to say. You guys all chug a beer together? I was stumped.

“They all get hugged and kissed!” he said. That’s the secret of deer camp: Behind that NO CRYBABIES ALLOWED sign, there are 16 guys jammed in one tiny cabin, hugging, kissing, saying, “Oh buddy, your beard’s rough this year!” That kind of stuff.

This camaraderie extends far beyond the cabin walls. “In May I had surgery because I have cancer. I’m laying in the hospital bed down at Dartmouth. And these three stooges. …” Dezotelle laughed at the memory. “The nurse is looking down the hall saying, ‘Oh, I don’t know about these three,’ and I knew exactly what was happening. These three were coming to visit me!”

As much as deer camp is about being together, it is a time for solitary reflection too. “When we’re not with each other, we’ve got six or seven hours alone in the woods. It gives you time to see and feel who you are, where you're going, what’s important, what’s not,” said Mackenzie. He even credited this reflective alone time to saving his marriage: “I’ve been married for 58 years. During that time, there’ve been times when either one of us, me or my wife, could’ve said, it ain’t worth it. All those times, I came right up here and sat on the porch with the stream running by. Took a walk in the woods. It puts things in perspective.”

For Dezotelle, camp is a meditation. “Once you step in the door, everything is just … like meditation where you relax. Save money on psychiatry! If you’re ever having trouble, you come up here. Just listen to the stream, take a nap.”

Next weekend, they plan to have 18 people at camp. “One or two are gonna have to sleep in chairs!” said Mackenzie. After camp is over, the guys will be in contact over email. They’ll chuckle at the yearly group email subject line: Only 278 more days till deer season.