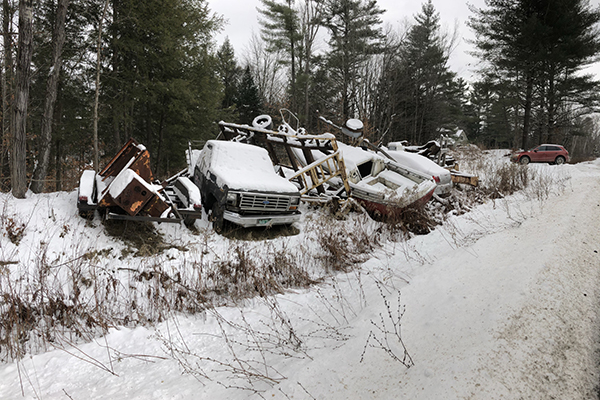 Shortly south of Hap’s Service Station on Route 100 in Waitsfield, there’s a collection of discarded items at the bottom of a private driveway.

There’s a lawn mower on the trunk of a Mitsubishi, a trailer, twisted pieces of metal, a sailboat and other items.

The town has received complaints about the collection regularly since the debris appeared, according to town administrator Trevor Lashua.

“Someone will ask about it on a weekly basis and we refer them to the Vermont Department of Environmental Conservation salvage yards division,” Lashua said.

The property is owned by Mike Marino who said he has the debris out there to protest the failure of Act 250 to enforce permit conditions for the property immediately south of his that is owned by Jacqueline Theurer.

“She’s leasing that property to four individuals operating as a contractor’s yard. One guy’s running a scrap metal operation. This is totally in violation of Act 250. It’s the only way to get anyone to pay attention to my plight,” Marino said, noting that he’d approached the town of Waitsfield but got no relief.

“We contacted Mr. Marino that day and told him we had a complaint about his property and we did not find a violation,” Roy said.

“We have two photos that the town sent us. One showing a silver car with a lawn mower on it and the other shows a truck with a boat and other materials. When the inspector was there on October 30, the silver car and lawn mower were gone. Within our statute is an allowance for someone to store up to three junk vehicles on their property along with other small amounts of stuff. What is there doesn’t seem to be a gross accumulation,” Roy added.

Roy explained that the definition of salvage yard is very broad and said that his department investigates and evaluates based on how great a threat to human health and the environment is present on any particular property.

“It’s not a matter of enforcement, it’s a matter of triage and where we should focus our resources. We have one full-time person in the program. We place our resources to deal with properties that have the greatest threat to human health and the environment. Usually that comes down to vehicles. If there aren’t a number of vehicles on site, we don’t pursue it any further,” he noted.

All it would take for Marino to move his debris is for the zoning and Act 250 permits to be enforced.

“Enforce the zoning and I’ll be happy. I can clean it up in two hours,” he said.