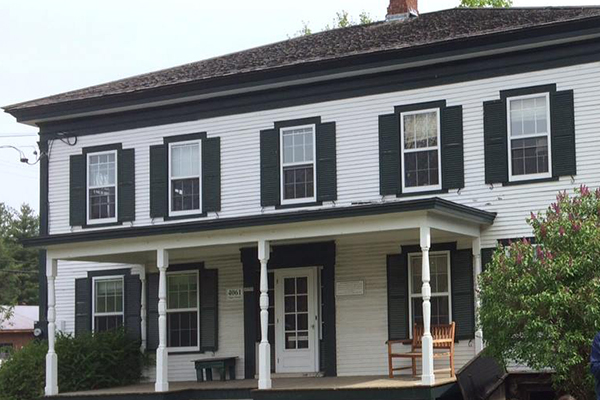 The Waitsfield Select Board met with Lois De Heer, president of the Waitsfield Historical Society, about upkeep of the General Wait House.

“My request for this meeting comes out of concern for the building and to address the overall limbo that I feel the General Wait House is in both financially and in terms of purpose and usage,” said board member Jon Jamieson at the select board’s November 25 meeting.

“I see the Wait House as a significant structure in town and I’m worried about the town’s commitment to it. I think we need to start a dialogue with users, tenants and owners about where we’re going with it,” he added.

Jamieson said he’d hoped that board chair Paul Hartshorn could be present for the meeting, but he was unable. Hartshorn has expressed strong feelings about whether the town should continue owning the General Wait House.

“I want to know what the historical society’s wishes and dreams are for the structure. Let’s start to try and divine a path forward on what should happen to that building,” he said.

De Heer said that the historical society members hoped that the building would be well taken care of because of its historical significance to the town.

“We have a big interest in it as far as what we’ve put into it when it was purchased by the town. But it hasn’t been well taken care of by the town. A few things have come down that probably need a lot of work and that does create a problem – a financial problem,” she said.

De Heer said she and the rest of the historical society members weren’t clear on how the financial arrangements with the tenants on the second floor work. She said she’d been under the impression that the rents from the second-floor tenants covered the costs of the Wait House.

Town administrator Trevor Lashua explained that since the Mad River Valley Chamber of Commerce moved out two years ago, the rent from the tenants (nonprofits) did not cover costs.

De Heer also pointed out how often the first-floor conference room is used by community groups for meeting and noted that the historical society is open one day a week and she wants to keep it that way and make sure it looks nice and stays nice.

“We get a lot of calls, emails from people who want to do family research. They either want to make an appointment to come in or email me and ask me to look up stuff for them. Some towns have presented historical societies with a building and they have to do the upkeep,” she pointed out.

Since the chamber moved out, the town has contributed to operating as well as capital costs and the building is open 24/7 with access to public restrooms and brochures and other information.

“Right now the town is a landlord to three to four nonprofits and the historical society in a building that has cultural value to the town. But is that enough to justify the town owning the structure, particularly in a deficit situation. Can we reallocate the building so that it can support itself? This is a big discussion. I don’t expect you (De Heer) to have answers for us tonight. Can we form a subcommittee with historical society members and other folks from town to address this?” Jamieson asked.

The board did not take action.