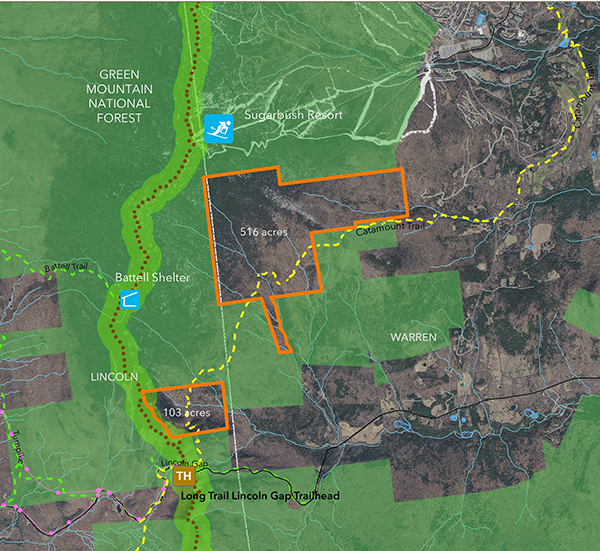 A 516-acre parcel of high-elevation wilderness land between Lincoln Gap and the southern boundary of the Green Mountain National Forest is one step closer to permanent conservation.

“We’re just waiting for the final budget to be passed, but we’re 99 percent confident that this will be funded. We’re requesting $84,000 from the current Warren Conservation Commission fund that will be used for hard and soft costs,” said Kate Wanner of the Trust for Public Land at a November 3 meeting of the Warren Select Board.

The town of Warren has been asked and this week the select board voted unanimously to contribute $84,000 toward the $480,000 cost of purchasing the land.

The Trust for Public Land has secured 75 percent of the money ($358,000) from the Federal Land and Water Conservation Fund and private donors. The rest, $84,000, will come from the Warren Conservation Reserve Fund.

According to Wanner, the impacts of this purchase include permanent protection of the forest, protection of a threatened segment of the Catamount Trail and a significant corridor of the Long Trail, protection of habitat connectivity for large-scale wildlife and new recreational opportunities for outdoor enthusiasts. This conservation project is expected to have an economic impact as well, generating economic benefits for local communities by providing a protected space for outdoor recreation and tourism, as well as sustainable timber harvesting.

This Lincoln Peak property is surrounded by 140,000 acres of Green Mountain National Forest, and lies within the significant Green Mountain Wildlife Linkage, the largest north-south wildlife linkage in Vermont. A linkage like this is important, for it allows species to move from north to south, and vice versa, in repose to a changing climate.

The Vermont Department of Fish and Wildlife designated the property as a “highest priority connectivity block” and the Nature Conservancy designated it as a “Priority Climate Area,” for above average rating on ability to maintain ecological functions and diversity of native species, even as the species composition changed in response to climate change.

Select board members felt confident that the public would approve this spending, seeing as the money had already been earmarked for conservation projects. They agreed that money spent on conservation should be spent on projects like this that protect wildlife corridors.