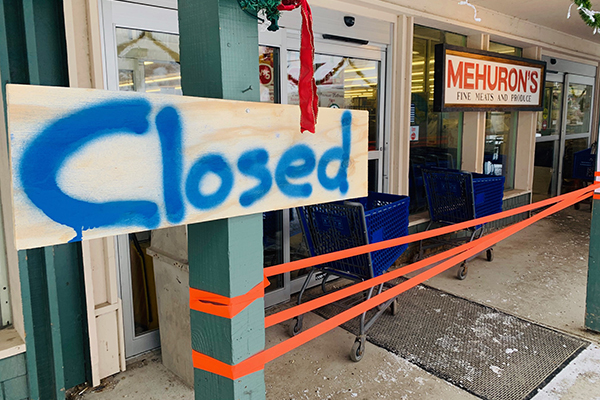 A massive cleanup effort is underway at Mehuron’s, which remains closed along with several other Village Square businesses after a January 5 fire.

The fire was reported early on Sunday morning by a Mehuron’s employee. Firefighters were toned out at 6:13, according to Waitsfield-Fayston Fire Department scene commander Tripp Johnson. Some 30 firefighters responded.

Johnson said firefighters from Warren, Moretown and Waterbury were called and had the blaze under control fairly quickly after it was found in Infinite Sports, but not before smoke and ash had inundated Shades of Winter Yarn Shop, Canteen Creemee Co., Kinney Drugs and Mehuron’s.

According to Vermont State Police fire investigator Todd Ambroz, the origin of the fire was determined to be at a wooden countertop in Infinite Sports where electronic devices were plugged in, including a cash register, computer with monitor, power strips and some lithium battery charging ports. Ambroz reported that the cause of the fire is undetermined but is directly related to some sort of electrical malfunction/issue.

Seth Thomas, owner of Infinite Sports, said the contents of his shop were a total loss. He is working with his insurance company on next steps. He said that he is concerned about the ash and contamination from the plastic in melted ski boots. He’s been in contact with a professional cleaning company and will begin the cleanup once he gets the go-ahead from his insurance company.

He said the earliest he could imagine reopening would be March.

At Mehuron’s, owner Tom Mehuron initially anticipated being able to open this week, but when interviewed on January 7 and 8, said he would know more about a reopening timeframe after meeting with his insurance company.

On January 7, Mehuron’s was a hive of activity with employees wiping down shelves and moving groceries that would have to be discarded. Several teams of professional cleaning people were on scene, removing and replacing all the ceiling tiles and heating ducts. Mehuron offered a brief tour, explaining that all perishable foods, including meat, dairy and bread, would need to be thrown out, along with anything in a cardboard box and all paper products. He said keeping his staff employed during this time is a priority.

“More than I thought is going to have to go,” he said.

Mehuron explained that the process of trying to salvage things like sealed olive oil or canned goods had to be balanced with the time and effort it will take to clean them. He said that he was working with his insurance company on a salvage plan.

“I want a plan that will get us open soonest,” he said. 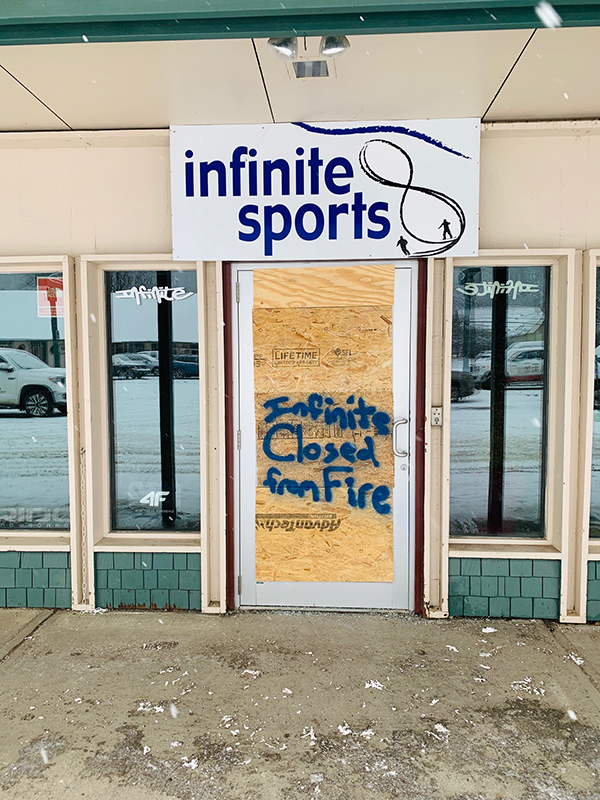 He is hopeful that it might be possible to reopen the state liquor store along with the beer and wine section of the store through some combination of plastic-framed walls.

In terms of getting the grocery store reopened, Mehuron said, “It’s definitely going to be more than a few days. It may be more than a couple of weeks.”

Canteen Creemee Co. was smoke filled, but owner Charlie Menard posted on social media that he was able to get his business aired out and cleaned and will be open this coming weekend. Kinney Drugs remains boarded up and dark. The door to the pharmacy was smashed to allow firefighters access and the store has smoke and water damage.

Judy Cowden, senior director of marketing and advertising for Kinney’s parent company in Syracuse, New York, said the company was working with Glentoran Corp., owner of the shopping center, and its insurance company as well as its facilities people to get a handle on the damage.

“Some of it isn’t immediately visible with the naked eye. There’s damage to the ceiling tiles and cables and equipment above it. One of the biggest problems appears to be soot getting into our equipment and computers. None of the prescriptions were transferrable and have all been refilled at our Waterbury pharmacy. We have expanded our free prescription delivery service out of Waterbury as well,” Cowden said.

Local Kinney customers are receiving automated calls telling them their prescriptions can be picked up in Waterbury. Shades of Winter Yarn Shop was open on January 8 with an air purifier and a lot of wool and other goods that smelled of smoke.

Fire scene commander Johnson praised the work of firefighters in finding and knocking down the fire so quickly. He said that firefighters were able to contain the blaze using only the water from their tankers, even though they’d set up hoses using fire hydrants near Irasville Country Store and north end of Village Square Shopping Center.

“It was a great effort by everybody involved. We’ve been training a lot with Warren and Moretown throughout the summer, working on communication, proficiency and safety skills. It really paid off,” he said.

He also expressed thanks for the taxpayers who provided a new engine, state-of-the art tanker, airpacks and unconditional support.

“We’re always looking for more people to get involved and there are many ways to contribute. You don’t have to be behind a hose,” he added.