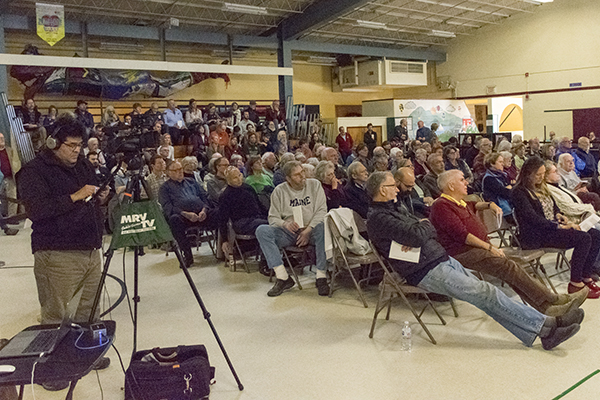 A proposal to amend Waitsfield’s charter to give town voters the ability to adopt a local option tax, via a second vote, was defeated 472-347.

During a lively and well-attended Town Meeting at Waitsfield Elementary School on March 3, a steady stream of people casting Australian ballots came through while voters discussed and passed the town budget and all other agenda items.

The budget amount of $2,051,885 was increased by $1,500 after voters heard from Ted Joslin and Phil Huffman, a member and chair of the town’s conservation commission. In making the motion that the budget be increased by $1,500, Joslin asked the select board why, for the fourth year in a row, their budget did not include the usual $10,000 for the town’s Restroom, Recreation and Conservation Fund. Board members said they were trying to keep tax increases down.

The board budget included $8,500 for the Restroom, Recreation and Conservation Fund.

Huffman reminded the board and those present of the economic value of recreation in The Valley as well as the importance of having funds available to leverage grants and conservation assets. Joslin’s motion to increase the budget by $1,500 and make the Restroom, Recreation and Conservation Fund whole passed by a voice vote.

Fred Messer, the town’s safety officer, raised the issue of why the fire department was keeping its budget so lean when he understood that some of the firefighters’ equipment was outdated and potentially unsafe.

Waitsfield-Fayston Fire Department spokesperson and town select board chair Paul Hartshorn said the department was working to update equipment over time to avoid a large tax impact. Hartshorn said that to bring all protective gear up to date would cost $30,000 per set and said that some 18 to 20 sets of gear would be needed.

What was left unsaid was the question of whether the budget would be amended again to add $540,000 to $600,000 to the budget to cover that cost.

“I think the fire department should do two things. Fight fires and train to fight fires,” Messer said when no further budget amendments were forthcoming.

“Are we being reckless in underfunding the fire department?” asked resident Nicholas Harmon.

“I feel like I have a conflict of interest here,” said Hartshorn, nothing that firefighters are also taxpayers.

Voters heard from Liza Walker, Mad River Valley Recreation District chair, along with rec district board member Luke Foley, who explained the reasoning for the district’s request for an additional $15,000 this year for a part-time employee.

Town resident Candice White spoke in favor of this and asked that the district pursue having The Valley and district host tournaments that would attract families to The Valley for multiday and weekend events. Matt Lillard echoed her suggestion on tournaments and also suggested that Moretown join the recreation district.

Voters approved rec district’s request as well as one from the Mad River Valley Ambulance Service for $15,000.

Near the end of the meeting, Hartshorn told voters that the select board has been considering turning the General Wait House into affordable condos, noting that “it’s a money pit.”

That prompted a response from Lois De Heer, president of the Waitsfield Historical Society, which helped raise funds and write grants (with the town) to purchase and renovate the town’s oldest structure. She stressed the historical importance of the building and its nonprofit tenants.