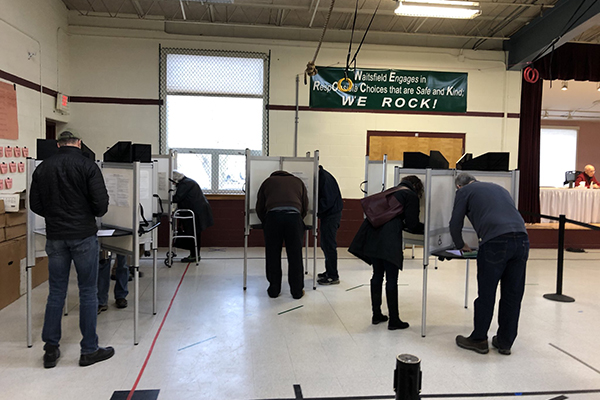 The push to reject the budget was exacerbated by a federal court ruling in which the judge quoted the school board’s attorney in his ruling: “If voters disapprove of the HUUSD Board’s grade configuration plan, they can indicate their disapproval by voting against the fiscal year 2021 budget that moves forward that plan.”

School board leaders stated prior to the vote that regardless of whether the budget passed or was rejected, their plan to rezone students would remain the same. The board will meet next Wednesday, March 11, with its new members.

“We know what a yes vote means on the budget. With a no vote there’s a lot of uncertainty. The board meets next Wednesday and welcomes three new members and we’ll decide how to proceed,” Hollister said.

Regarding whether the no vote represented voter dissatisfaction with rezoning, Hollister said it’s too hard to interpret a yes/no vote that way. She said HUUSD constituents are under intense tax pressures.

“I imagine there are many reasons for people voting no,” she said, noting that voter turnout was significantly higher this year than in prior years, which she said could be due to the presidential primary.

There were contested school board races in Moretown, Waterbury and Waitsfield. In a two-way race for one seat on the Harwood Unified Union School District Board representing Moretown, Lisa Mason received 472 votes and Chris Noyes received 169 votes. They were vying for Gabe Gilman’s seat.

Alec Adams was elected as a write-in candidate to the school board from Duxbury.

Voters in Fayston and Warren unanimously passed a nonbinding vote of no confidence in school district Superintendent Brigid Nease.

While Warren voters were holding their Town Meeting, Warren HUUSD representative Rosemarie White stopped at Waitsfield Elementary School where polls were still open and removed a campaign sign for Bennett. Asked about it, White said, via email, that she stopped of her own accord, knowing that school Principal Kaiya Korb, wanted to keep the school property apolitical.

“I know Kaiya has a rule to keep the school apolitical and I was helping to abide by her wishes. There was a large pile of signs which had apparently been taken down earlier in the day and included signs encouraging people to vote against the budget as well as support for Bernie,” White said.

Korb said, also via email, that it was her policy to remove signs that are political and allow signs for things like the Waitsfield PTO’s Ski and Skate Sale.

“My understanding (and actions) have been that all signs on school property are at my discretion to decide about. I have not conferred with others, except for Jen Peterson, and a read of state statute regarding polling places, to make this decision,” Korb explained, referring to Jen Peterson, Waitsfield’s town clerk.

Will Senning, Vermont secretary of state elections director, said that it would be Peterson who has the authority to allow, disallow or remove signs as the presiding officer of the election/polls.