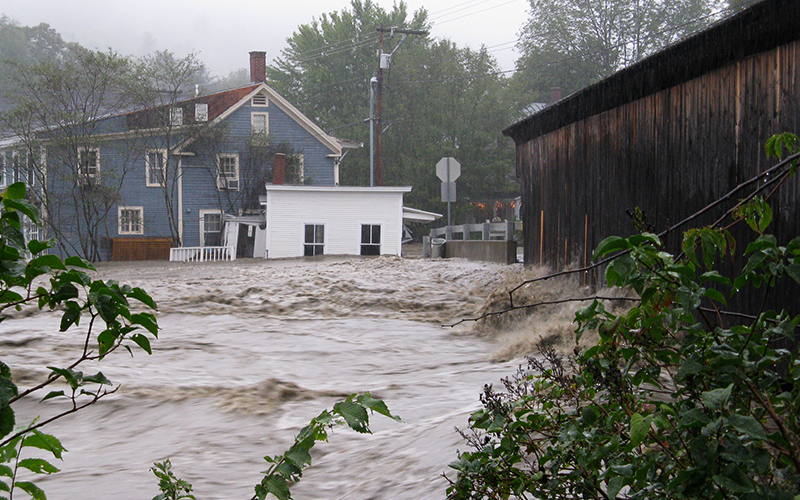 August 27 marks the ninth anniversary of Tropical Storm Irene. The Mad River is known as a “flashy” river -- the combination of steep terrain, thin soils and intense storms can cause the river to rise incredibly quickly, even if it’s only raining in one part of The Valley. The Mad River watershed, has a long history of damaging floods. The most recent -- June 1998 and 2011’s Tropical Storm Irene -- are among the top five highest levels of flooding recorded at the USGS gage in Moretown. During Irene, the USGS gage in Moretown rose from 66 cubic feet per second (cfs) to 23,600 cfs in under six hours -- a discharge even higher than the estimated highest during the historic 1927 flood. In The Valley more than 1,200 acres of farm and pastureland were damaged, about 200 homeowners reached out to the Federal Emergency Management Agency (FEMA) for aid, and local roads sustained expensive damage.

After the 1998 flood, Friends of the Mad River (FMR) produced a guide to Unmapped Flood Hazard Areas. Not only can the river and streams inundate and cause damage to infrastructure in the flood plain, they can take a totally new and unexpected path or dramatically erode riverbanks during floods due to the high velocity water.

Damage to the Mad River Valley from flooding is related to topography but also to the way people have historically manipulated the river channel – by straightening, damming and confining it with bridges, roads, villages and homes. River science has become the foundation for understanding where the river might move as it adjusts to equilibrium and anticipating how to avoid damage to infrastructure in its path. FMR worked with the Vermont Agency of Natural Resources (ANR) to produce fluvial geomorphological assessments that show how the river moves across the land, where it can access flood plains to disperse energy, and how wide the river corridor needs to be to allow the river to meander and adjust naturally. In the last two decades, Valley towns have developed flood overlay zoning districts in response to the information from these assessments and from revised FEMA flood plain and risk mapping.

Acknowledging Irene’s damages in August 2011 and implications for the future, FMR and its partners in the Mad River Valley Conservation Partnership, including Mad River Valley Planning District (MRVPD) and Vermont Land Trust, as well as ANR and town historical societies, hosted a symposium called “It’s a Mad River” in November 2011. Together, they shared the context and history of flooding, costs of Irene and stories of resilience. In a show of solidarity, the community volunteered about 15,000 hours to help neighbors clean up property and the river.

In 2013, working closely with FMR and MRVPD, the Vermont Agency of Commerce and Community Development, with federal funding, laid out four specific recommendations for long-term resilience in The Valley: conserve river corridors, protect vulnerable development, plan for future development out of harm’s way and implement stormwater runoff management across the watershed to slow, spread and sink rain and snowmelt.

In 2015 FMR and MRVPD invited 20 community volunteers to participate at the 2015 Leahy Center Environmental Summit, where the group focused on strengthening The Valley’s resilience to future floods by better managing runoff. A taskforce formed that later called itself “Ridge to River” and was comprised of two representatives of the five watershed towns and led by FMR, with grants for its still-ongoing work. “Better managing runoff is a way we can actually take our vulnerabilities into our own hands,” Corrie Miller, executive director of FMR, said. “With less water moving more slowly across the landscape before it enters streams, our community will experience less flood damage.” The taskforce’s multi-year study and plan collected landscape, planning and community data that highlighted needed protections of soils and forests, mitigations of impervious surfaces and improved maintenance of transportation arteries like trails, roads and driveways.

FMR developed the Storm Smart program in 2017 to help landowners address some of the challenges identified by the Ridge to River taskforce. Through the Storm Smart program, property owners can get a free site assessment and suite of recommendations to enhance their home, driveway and yard’s ability to absorb storms. By making adjustments, each homeowner or property manager can lessen flood damage to downstream neighbors.

FMR board and staff contributed to this story.

Friends of the Mad River