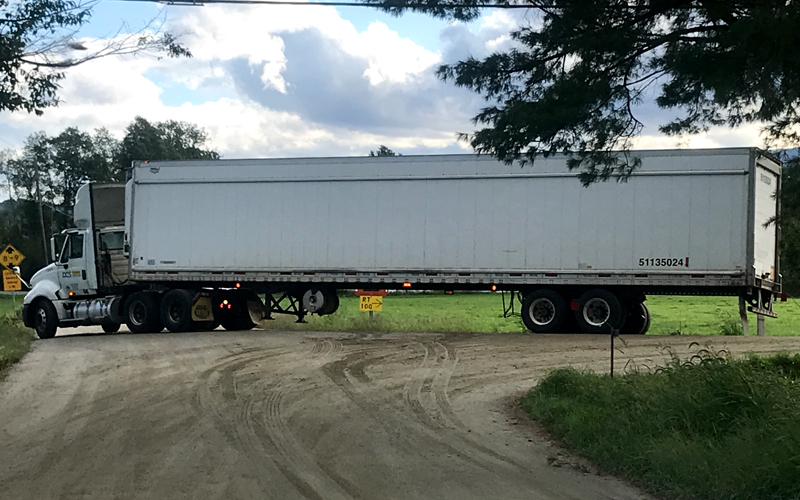 A tractor trailer got stuck at the intersection of Meadow Road and North Road on August 25 requiring nearby residents to help the driver turn around. The driver was trying to detour around the Route 100B closure at the south end of Moretown.

The road is closed for 60 days so that the bridge over the Mad River can be replaced. The official detour is Route 100 to Route 2 to Route 100B but many, many drivers, including the driver of the tractor trailer, are using Class 3 dirt roads in Waitsfield, Moretown and Duxbury to get around the detour. Drivers are taking Meadow Road to North Road to Pony Farm Road and Route100B north to Steven’s Brook Road to Route 100 north (and the reserve route as well).

So, what’s it like living in the detour zone?

Stan Peck, who lives on North Road said traffic is pretty steady on the road but notes that he doesn’t go out on the road much. He said he’s seen the sheriff around periodically and said that he felt people were being fairly good about observing the speed limit.

“I’ve been rather surprised. There’s definitely been an increase in the volume of traffic, but they haven’t been speeding any more than usual. The occasional vehicle will speed by. We’re seeing a lot of very large trucks that turn around at the intersection of Meadow and North roads. We’re seeing the trailers that haul the largest type of heavy equipment try to turn around. They get as far as the detour sign and then there is no place to turn around,” Messer said.

“Since COVID foot traffic on the road has really stepped up. So, we have increased vehicular traffic and increased people traffic. It’s not the best of situations,” he said, noting a concern that some of the vehicles were over the road weight restrictions for Class 3 roads.

“We did ask the sheriff to patrol there more than normal. VTrans gave us $14,000 to use for speed enforcement, signage and road maintenance,” he said.

Further north, after North Road becomes Pony Farm Road (which intersects Route 100B just north of the road closure), residents are less sanguine about the impacts of the detour and added traffic.

Chris Stephenson lives with his family in Moretown near the north end of Pony Farm Road and also has a you-pick berry patch across from Fancy Plants Greenhouse.

“It’s a lot of traffic for those of us who live there or recreate on the road. There are lots of cars and trucks and people going to work like it’s the way to go. It’s frustrating to see more and more box trucks, construction trucks and heavy equipment-hauling trucks. My neighbor has seen two 18-wheelers. It’s intense,’ Stephenson said.

“For us with our you-pick farm, it’s the dust. There’s an amazing amount of dust. Waitsfield might have done a better job of getting magnesium chloride down than Moretown,” he added.

In terms of police presence, he said he wished there were more. He also said he reached out to Moretown Select Board member Don Wexler to voice concerns about a weight limit sign that used to be near the north end of Pony Farm Road that had disappeared.

He’s not looking forward to adding school buses and leaf peepers to the mix of traffic on the road.

“The traffic! It’s heavy in volume and weight. It’s dusty. It starts early. It ends late.

So many people are out biking and walking and running (more than ever!) and it’s really dangerous with all the traffic. The sheriff has been setting up a speed trap which seems to be helping,” Rossbach said.

“Unless we get more consistent rain, the town should spread calcium chloride to keep the dust down -- visibility is impaired for drivers and air quality is no good for runners and bikers. I’m not sure what information is out at Route 100B/Route 2 but 18 wheelers and other large trucks are coming through and they can’t get through the covered bridge before Tremblay Road and the Small Dog bridge is narrow and has a weight limit. Better signage for large trucks is needed,” she added.

Cory Stephenson echoed the concerns voiced by her husband Chris Stephenson, noting that traffic volume is about 1 1/2 to two times more than usual. She said most have been considerate and are driving the speed limit.

“Of course, there are always a few that seem to ignore the differences between Route 100 and a back road. There have been issues with very large vehicles making it to Pony Farm Road, then with no place to turn around, they’re continuing on until they realize they can’t get over the bridge at Small Dog either, then they turn around on Pony Farm Road and come back out. I look forward to no stoplight and a new bridge. It will be great for all of us in the Mad River Valley,” she said.

Mike Schavone lives on North Road between the Carpenter and Neill farms. He said rush hour is pretty tough. He said that before the bridge project started there had been no speed limit signs on North Road and now it is posted at 35 mph.

“I don’t think I’ve ever driven 35 mph on this road. People see the signs and are driving 35 to 40 mph and there are people walking and biking on the road, plus kids, dogs and cats. There sheriff has been set up across the street a couple of mornings, but it’d be better if he was there more so people traveling this way would get used to him,” Schavone added.