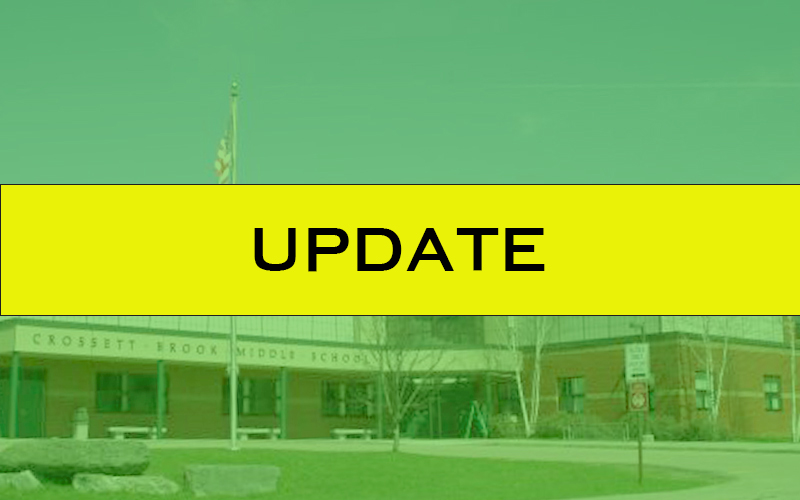 After the Crossett Brook Middle School was the first school in the state to report students with COVID-19, Harwood Unified Union School District leaders had some recommendations for the health department about protocols and also will change how they communicate with the community around positive COVID cases.

“Recommendations we have for VDH moving forward include expediting test results for Vermont teachers and contact trace adults first to enable schools to remain open given the shortage of substitutes,” Brigid Nease, HUUSD superintendent, said.

Crossett Brook Middle School, Duxbury, remains closed this week after two students tested positive for COVID-19. All classes are remote and all other district schools are open.

The students, a fifth- and seventh-grader, were asymptomatic according to Harwood Unified Union School District (HUUSD) Board chair Caitlin Hollister. The students attended school on September 8. Nease said she had to close the school for a week because she could not staff it.

The reason she could not staff the school had to do with the timing of when Vermont Department of Health contact tracers could get to work, which required that Nease and her team compile data for the health department.

Nease et al learned that there were two cases in CBMS on Sunday afternoon after which they completed a data sheet for VDH.

“This included using our protocols and involved two teams in the core pods, some limited crossover in applied academics classes, and the bus, which also had Harwood students on it (none from TBPS). The list sent to VDH included 48 students and 14 teachers/staff. From there the protocol is that the contact with the families comes from VDH. VDH determines who should quarantine,” Nease wrote in a September 15 email to the community.

She said that she and her team learned that contract tracing can take longer than 24 hours which is the timeline they understood from their training.

“The contact tracers were not able to begin until Monday morning at 8. As of Tuesday morning at 10:30, contact was not made with all families. Several attempts are sometimes necessary before a family can be reached,” Nease reported.

After the contact tracing process started the number of teachers and students advised to quarantine changed to 22 students (the two positive cases, another 16 students from CBMS and four from HUHS) and four teachers who needed quarantine. Those in quarantine can get a test seven days after exposure which was Tuesday, September 16, (after the September 8 start of school). Test results are expected back within 24  to 48 hours. Those with a negative test may return to school/work. Those who don’t get tested need to quarantine until September 22.

Nease also said that this experience revealed the need for more communication with the community when these situations arise.  She said after her Sunday afternoon email to the community, emails from concerned parents, staff and others poured in.

“We realized the recommended letter sent was not enough. The protocol needs to be changed. In the future, after we send the required contact list to VDH, the community letter will go out and then we will add 1) a letter to all families on the list alerting them to the fact that they may receive a call from VDH contact tracers; and 2) a letter to all families in the affected building letting them know that if they did not receive a letter stating they were put on the list to VDH they are in the clear,” Nease said.

She reiterated the fact that CBMS had to be closed because of the number of students and staff on the contact list and that they were spread throughout the building.

“The good news is based on our strictly adhered to protocols and training, the list of possible staff/students exposed to a level of concern was greatly reduced by the contact tracers. Keeping the 6-foot distance, wearing masks, disinfecting surfaces and not sharing materials paid off,” she said.

Going forward, Nease said positive COVID cases should result in only partial closures of schools as much as possible.

“This will be much easier at the elementary level, where there is more ability to close one or two classrooms based on the contacts. However, we do need to include the buses. The higher up in the grades you go the more difficult it is because of the individual classes students take. Our goal is to keep schools open for in-person instruction as much as possible,” Nease explained.

In terms of busing, she said parents frequently asked why if some Harwood Union students were considered close contacts due to the bus ride, why more Harwood students and staff were not put on the list for contract tracing.

“The answer is those students could not have been contagious immediately that day while in attendance at HUHS. So that seems to be where the contact tracing chain ends. One area that also generated many questions, where we need to learn more, is what about siblings of students placed on the list? Since siblings are not part of our school protocol based on physical proximity, it is up to the VDH contact tracers to determine that with the family,” she added.

Finally, Nease reminded the community that all schools is the district will move to two days of in-person learning next week, starting September 21.  That same day, HUUSD will hold a community forum at 6:30 p.m. for addressing community questions and concerns.  See www.huusd.org for details on how to attend the meeting.

Nease said that her teams debriefed on September 15 and felt good about how the event was handled.

“Safety is maintained, confidence in living in the COVID new school world is growing. Let's model for the rest of the state how to keep schools open as much as possible, not spread the virus and keep everyone emotionally and physically safe. Our district cannot succeed alone. We need each and every family and business in the community to be committed to our common goal,” she concluded.