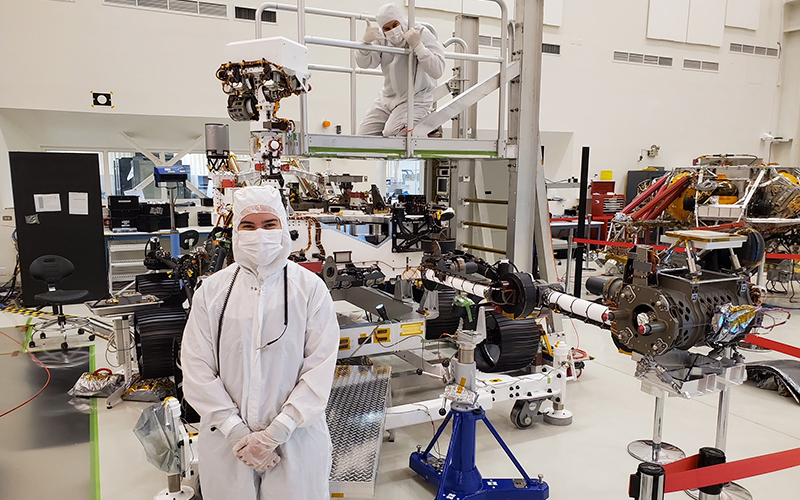 When NASA’s Jet Propulsion Laboratory (JPL) launched the Mars rover, Curiosity, on November 26, 2011, Harwood Union High School (HUHS) graduate and Fayston resident Emmy Kelly, who was 14 at the time, stayed up until the wee hours of the morning to watch it land.

“I was very into space as a kid,” she told The Valley Reporter. “Watching Curiosity land, I realized, that’s what I want to do. I want to work at JPL and I want to make Mars rovers,” said Kelly.

Now, 10 years later, Kelly works as a mechatronics engineer at JPL. “Never in my wildest dream did I think that I would get to work on a rover that’s basically Curiosity part two,” said Kelly.

After graduating from Harwood in 2015, Kelly briefly attended Smith College, then transferred to Northeastern University in order to pursue her rover-engineering dreams. Northeastern has a unique internship program that lets students do six-month-long internships while obtaining a degree. “It’s like having a full-time job, essentially,” said Kelly.

During her first year as a mechanical engineering student at Northeastern, Kelly applied to an internship at JPL. “I didn’t get in,” said Kelly. However, she was not deterred by this rejection.

Over the next year, Kelly continued her studies and dove head first into her robotics extracurriculars. “I was part of the Mars ice challenge, which is a college competition to build a robot that can harvest subsurface Martian ice to be melted and used as water,” said Kelly. “That’s where I got a lot of experience.”

Junior year, when Kelly applied to intern at JPL the second time, she got in. “I got it the second year, and the year after that. So, I ended up working there for a total of a year. That’s when I worked on the Perseverance rover,” said Kelly.

The Perseverance rover is on Mars now. The rover was launched on July 30, 2020, shortly after Kelly graduated from college and started working full time at JPL.

The Perseverance rover’s mission is to look for evidence of past Martian environments capable of supporting life and to collect rock and soil samples from those environments to store on the surface.

Kelly explained how the rover collects samples. “We have a couple different types of drills,” she said. “One of those drills is going to dig into Mars and collect cores, about the size of a finger. Those cores are going to be put into sample tubes and left on the surface of mars, and then a future mission will go to Mars, take those sample tubes and bring them back to Earth,” said Kelly.

For the Perseverance rover mission, Kelly’s job was to help build the part of the rover that processes the tubes. “I worked on the part that takes the sample tubes from the robotic arm and drill and brings them inside the rover. That whole assembly is called the adaptive caching assembly,” said Kelly.

The adaptive caching assembly does more than just collect samples, however. It takes pictures of the samples, records how much material is in the sample tubes, seals the tubes off and stores them inside the rover until the Perseverance team finds a spot to leave them on the surface.

Currently, Kelly is working remotely for JPL from her home in Vermont. “It’s a little frustrating,” she said about remote work. “One of the things that I love about my job at JPL and about mechanical engineering is that so much of it is hands on. But now I’ve shifted to doing a lot more design work and analysis of those designs, so most of my day is spent behind my computer.”

However, Kelly has set up a small testing rig in her garage for a special new project she’s working on. “The project that I’m working on right now is Europa Lander, which is a proposed mission,” said Kelly. “It’s not official or anything yet.”

The proposed mission is to put a lander on the surface of Europa, one of Jupiter’s moons. As Kelly explained, while a rover has wheels and is able to move around, a lander sits still on the surface. “The Europa Lander wouldn’t move,” she said. “It would have a robotic arm on it to do its tasks. For this project, Kelly is working with a team to develop the lander’s sampling system.

“We don’t know much about what the surface of Europa looks like, and so we’re trying to make a system that can collect some of the surface, regardless of what it is,” said Kelly. “It could be snow, it could be ice, it could be hard rocks. The testing set up that I have in my garage is for making different tools that dig into different things, trying to figure out what’s going to work best on Europa.”

While designing these systems can be intense work at times, Kelly says “JPL does a good job at prioritizing people staying sane.” Moreover, Kelly doesn’t mind the occasional long-haul on the job. “It’s something that I love a lot, and everyone at JPL has the same passion for it,” said Kelly. “So even if you’re in one of those rare situations where you really have to grind it out, it’s a joy to do it, because you know that you’re pursuing this ridiculously cool goal of human exploration.”