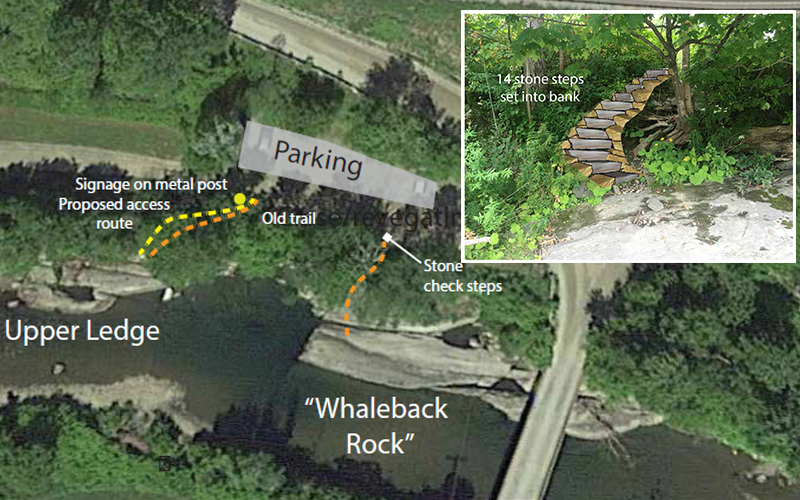 Noah Pollock with Waitsfield-based Northern Forest Canoe Trail (NFCT) briefed the Waitsfield Select Board on the project this week.

He explained that the project will address erosion and improve access to the river. Currently access to the river and for paddling is currently via two informal trails on a   steep eroded bank. This site is a popular summer swimming destination as well. It is also used by children and staff at Neck of the Woods.

Heavy use degraded the bank, damaged riparian vegetation and the steep, slippery paths are difficult for those with limited mobility or for young children the board learned.

Pollock explained the plan to install a series of stone steps set into the bank. At the northern trail, which leads to a large exposed rock that he called Whaleback Rock, two to three stone steps will serve as check-steps at the entrance of Whaleback Rock trail. They will be backfilled with crushed stone, allowing stormwater to infiltrate. The steps will reduce slipping hazards, slow stormwater and help reduce further erosion.

At the second trail, which he referred to as Upper Ledge, the existing path is steep, eroding and root-bound. The goal there is to install 14 stone steps, set in a way that protects the existing vegetation and minimizes intrusion into the floodway. Those steps are planned to be 24- to 30- inches wide, designed to be comfortable and resistant to ice flows but also small enough to avoid encroaching into the floodway.

“Both sets of stone steps will provide safe and sustainable access to the river. We hope to get started in June. We’re scheduled for the development review board for a conditional use permit as well. The child care center is quite excited to have better access to the river,” Pollock said.

Select board member Fred Messer asked if the plan had been engineered by a professional and Pollock said that it was developed using the expertise of NFCT and in consultation with Friends of the Mad River and Vermont flood plains manager Ned Swanburg.

The project narrative notes that Waitsfield zoning bylaws generally require a no-rise certificate for work within the flood plain and that the partners on this project are requesting a variance in this requirement for this project for several reasons. The project entails using about 3 yards of stone and Swanburg advised the partners that this project is a good candidate for being exempted from a formal engineering analysis due to its small footprint.

“I’ve seen water go through there more than once. I’d hate to see you put in a lot of effort and see it wash out,” Messer said.

“I’ve yet to lose a set of stone steps,” Pollock said, adding, “but when you’re working with Mother Nature anything can happen.”

He said that the plan calls for digging the steps into the bank and armoring them on either side with armor rocks.

“Everything should be locked in,” he said, noting that stones of this size are well anchored and resistant to flood damage. The narrative points out that the stone steps can be installed with hand tools which will minimize bank modification and disturbance and that by setting the stones in the bank there should be not impacts on flood carrying or the sediment transport capacity of the river.

Board member Jordan Gonda asked if a handrail was considered since young children will be using the steps. Pollock said that handrails have been used in other projects but do need to be removable due to ice in the winter. He said that maintenance of the improved access would be in partnership with Friends of the Mad River, Mad River Path and NFCT interns.

Josh Schwartz, executive director of the Mad River Valley Planning District, was present at this week’s Zoom meeting of the select board and praised the collaboration and thanked Pollock and NFCT executive director Karrie Thomas for bringing the access issue to the community’s attention and then working with community partners to bring it to fruition.