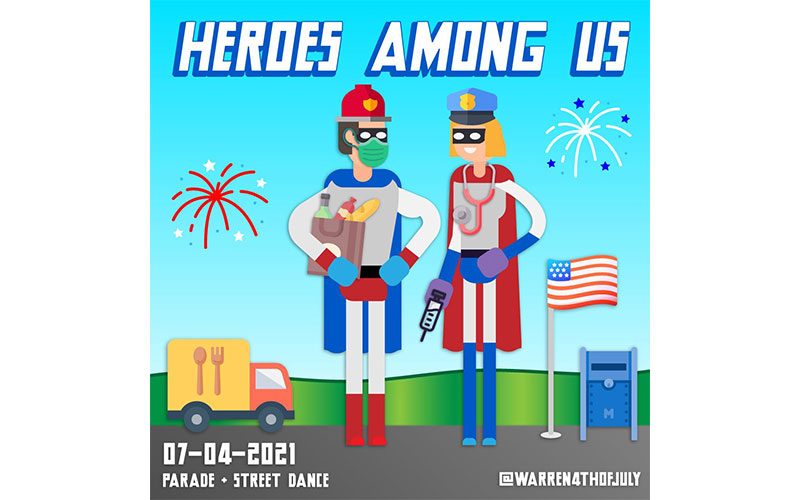 After weeks and then months of uncertainty, evolving and changing state regulations and vaccine metrics that have moved the goalposts – the answer is, yes, there will be a Warren Fourth of July parade and street dance this year.

The theme for this year’s parade is “Heroes Among Us” celebrating local essential workers and the vital role they played during the last year including emergency services, child care providers, delivery people, grocery store workers, medical professionals and all who stepped up during the pandemic, the parade committee reported.

The Warren Select Board, on May 25, approved a proposal for a scaled-down celebration that will not include field activities and a beer garden at Brooks Field and no Buddy Badges or entry fees.

This year there will be no parking at Yestermorrow and Sugarbush and no Mad Bus service ferrying people to the parade. Rather, people will park where allowed in and around the village and also park at Brooks Field this year. To facilitate the Brooks Field parking, inbound traffic from Route 100 to Main Street and Brook Road will be allowed prior to the parade.

Susan Klein, who manages and plans the parade for the Mad River Rotary, fielded questions from board members about the event. Board member Camilla Behn said she was not that comfortable with the event going forward due to the inability to know if people were or weren’t vaccinated. She pointed out that a lot of people will be visitors from out of state and noted that the parade usually attracts a lot of 20- to 30-year-olds, the cohort with the lowest vaccination rate in Vermont currently.

“I’d almost rather keep it on the lowdown and if you show up, you show up. Do we want to encourage publicity,” Behn asked.

Board member Luke Youmell said that social distancing and following the appropriate safety precautions would be needed.

Devin Klein Corrigan, who was appointed to the select board that evening to fill a vacancy, pointed out that the level of transmission in outdoor spaces is really low.

Board chair Andy Cunningham and vice chair Bob Ackland were fully in support of having the parade.

“I’m not uncomfortable at all. I am ready to see people have a good time. It’s probably less risky than getting in your bathtub,” Cunningham said.

Klein said that the reality is that people will need to be mindful of the people around them as well as themselves.

“People will be encouraged to follow the state recommendations and be respectful of people’s space,” she said.

Klein said that George Dorsey and his team at The Warren Store will again host the band providing the music for the street dance on the deck of the store with revelers dancing in front of the store. Watch for regular updates in The Valley Reporter, on WDEV, social media and http://www.Warren4thofJuly.com.