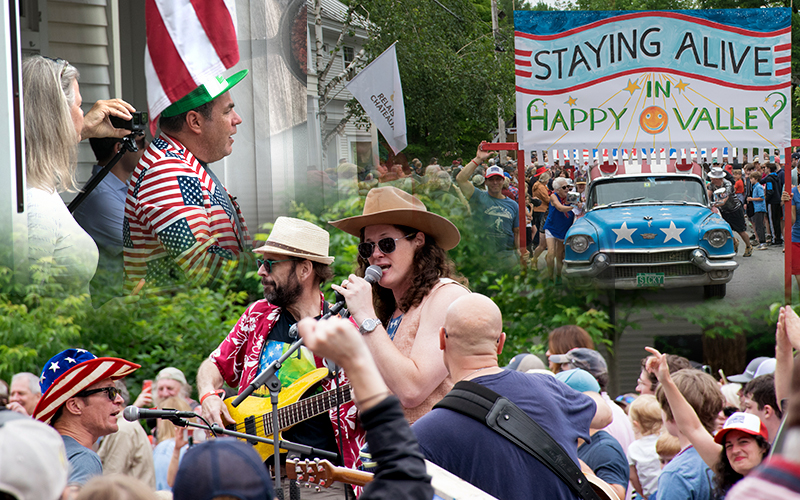 Dr. Butsch and Friends with the ambulance Sicky (which died and had to be pushed) brought down the house with this year’s Fourth of July float which stretched for about a city block and featured Sicky, nurses carrying signs thanking Mehuron’s heroes, offering bawdy signs about little jabs (and much more) as well as The Grift playing their version of the Bee Gee’s “Stayin’ Alive.”

As with any Warren Fourth of July parade, it was chaotic and a bit disorganized but revelers didn’t seem to mind as they socialized with friends and hugged people not seen in far too long. Warren’s streets were as crowded as in pre-pandemic times and people celebrated the 72nd version of the parade and street dance.

The theme for this year’s parade was “Heroes Among Us” and many of the floats adhered to that theme and many didn’t. The annual Prickly Mountain float was a behemoth – as usual – replete with dozens of participants and featuring a giant cicada that emerged from its 17-year sleep to fly up above the streets of Warren, plus a UFO, winning that tribe the award for strongest thematic metaphor.

U.S. Senator Bernie Sanders made an appearance and was greeted, as always, like a rock star as he fist-bumped his way down the street. Perpetual parade regular Tim Seniff and his one-person float, Americans for A Brave New World, challenged pandemic thinking and the COVID Conquerors, a two-person float that urged people to vaccinate or else

The Mad River Valley librarians danced through the streets of Warren pushing and wheeling their library carts in formation, stopping every so often to bang on the tops of the carts and “Shhhhh” the crowd.

The Meals On Wheels float, noting that its volunteers shop, chop and deliver drew cheers from the crowd as did the Mad River Valley Little League All-Stars float and the Valley Players’ “Alice’s Adventures in Wonderland” float. Michaela Kingsbury rode in the back of a convertible costumed believably as Lady Liberty and the Free Range Rippers buzzed the streets in dirt bikes.

Buddy the alpaca from Wayfarer Alpaca Farm was popular with the crowds as was the Warren Village People Saved by the Aliens float. Sugarbush’s float was deemed best commercial and highlighted disc golf Thursdays while the ZenBarn Music and Food float was deemed best out-of-Valley experience.

An Airstream trailer as a float for Yarnstream was unique and the parade featured several great antique vehicles including Jack and Audrey Mosley’s 1939 Ford police car and 1941 Cadillac, a 1935 Dodge truck driven by Butch Hartshorn (and restored by Kevin Lavanway) and the Viens families’ 1972 Chevy pickup.