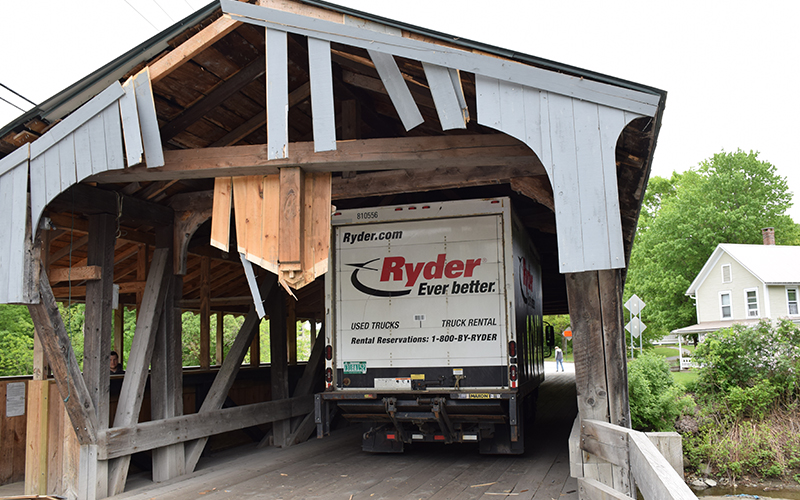 The Waitsfield Select Board accepted the $27,500 bid from Hoyt Construction to repair damage done to the Waitsfield covered bridge on May 28 when a box truck attempted to cross the bridge and became stuck and damaged the bridge.

Waitsfield town administrator Annie Decker Dell’Isola said that selecting the contractor is the first step and explained that the town is now working with Hoyt Construction on timing of the repairs, how long it will take and whether the bridge will need to be closed for any period of time. Dell’Isola noted that the RFP seeking the repair work included details that contractors would need such as planned community events involving the bridge, like the Green Mountain Stage Race and Mad Marathon in September.

On May 28, 2021, Trevor Moyes, 19, of Barre, driving a 2018 Isuzu box truck that exceeded the posted height limit for the bridge, attempted to pass through the bridge headed east. Moyes and the truck struck the outside and roof of the bridge before getting stuck in the bridge.

The truck got stuck around 11:30 a.m. and was closed for several hours until state bridge inspector Martin Kelley inspected the bridge determining structural soundness and the extent of the damage.

“The structure is reopened and damage was done on portal and the first cross member was broken out. Some damage along couple of the roof rafters and lifted up some. Minor scrapes along remaining cross members and couple of knee bracing. Minor damage on other portal along the lower ends of boards. Town will monitor till repairs are done,” Kelley wrote in assessing the damage.

Kelley determined that the bridge was safe for travel and the bridge has remained open while the town worked its way through the insurance claim and put the repairs out to bid.

On the day of the crash Waitsfield Select Board vice-chair Christine Sullivan was at the scene and reported that the truck was wedged so tightly in the bridge that even after air was let out of the tires, the truck still scraped its roof and the cross members as it was driven forward (east) and out of the bridge.

Members of the Waitsfield road crew were on scene and helped removed damaged pieces of the bridge.

“The bridge was closed until early afternoon after I met with the state bridge inspectors and they determined that the bridge is safe for travel. We’re still working on whether the road foreman, Rodney Jones, can undertake the repairs or whether we need someone else. The state inspector did not think there was any damage below the deck of the bridge,” Sullivan said.