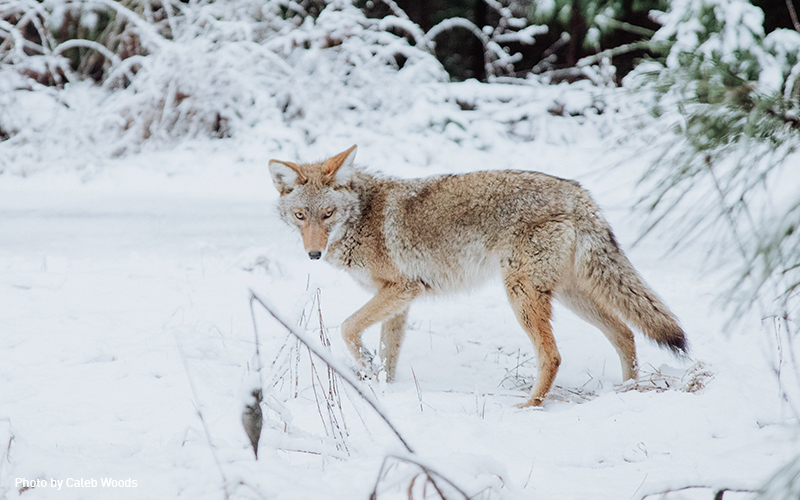 Recently, Valley residents have reported seeing and hearing coyotes. Their recognizable cries, echoing calling each other and echoing back to each other are a common occurrence this time of the year. One resident even reported a coyote coming each morning to eat apples and pears from their trees. Coyote pups are born in spring and are trained to hunt in the fall, which is when the yips and cries they use to communicate with each other are most prevalent.

It’s also the time when they are most likely to prey on livestock. Kim Royar of the Vermont Fish and Wildlife Department cautioned that folks with sheep, cattle or other livestock should bring animals into a barn at night or keep them in a pen close to their house. She also said guard dogs usually help deter the predators. As with keeping other predators away, she said people should keep garbage secure, avoid feeding their pets outdoors and, if they see coyotes lurking around bird feeders, bring the feeders inside. Human and domesticated animal interactions with coyotes are rare in Vermont, but they do happen. Royar advised if someone sees a coyote, they should scare it off with loud noises. Banging on pots or pans or shouting usually scares them away.

Coyotes can be found throughout Vermont, in forested areas, open fields, wetlands and even in suburban areas, and typically have a home range of about 15 square miles. The highest concentrations of coyotes in Vermont are found in agricultural areas where prey is abundant. Coyotes prey on deer and other small animals, as well as eating nuts, berries and other fruits.

According to the Vermont Fish and Wildlife Department, coyotes first appeared in Vermont in the 1940s and their numbers increased in the 1960s and 1970s. The population of coyotes in Vermont is estimated to be between 8,000 and 11,000 in the spring, and 6,000 and 8,000 in the fall and winter, when pups disperse. Populations typically increase in years where food sources are abundant. So strong crops mean more coyotes, both because they themselves eat fruits and nuts, and also because the small mammals they prey on do, too. Mating season is in February, and pups are usually found in late April or early May. An average litter is six pups.

While sometimes referred to as “coydogs,” biologists no longer use this term when referring to the Eastern coyote. Prior to European settlement, coyotes were not found east of the Mississippi River. Coyotes found in Vermont migrated from Canada and bred with wolves, so they tend to be larger than their western counterparts.

In Vermont, coyotes may be hunted any time of the year, and a regulated trapping season runs from the fourth Saturday in October until December 31. Hunting tends to keep coyotes afraid of people, which is critical to their survival. “Coyotes play an important role in Vermont’s ecosystem,” Royar said. “They’re here to stay.”