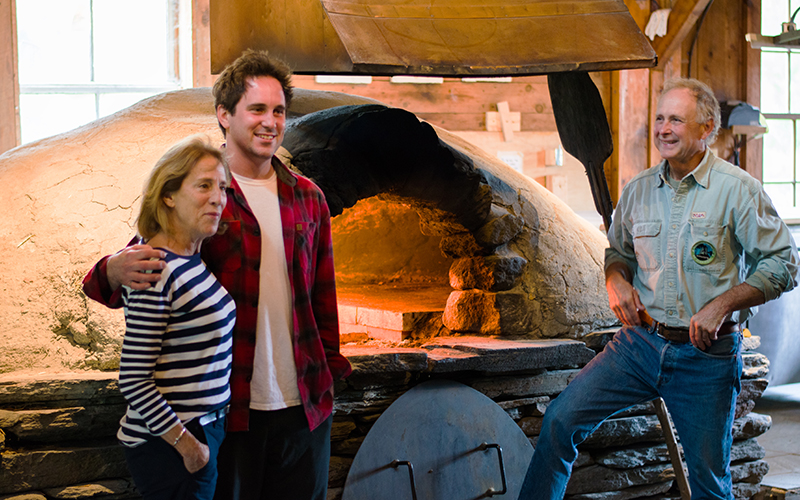 “This is a historic moment for us. I’ve struggled a bit with taking this oven down. It holds a lot of memories, memories going back to when I was a younger man and all of the hopes and dreams I had for it and how, over the years, many have played out – some in ways I’d imagined and many in ways I had not,” said George Schenk, founder of American Flatbread, about this week’s deconstruction and rebuilding of the wood-fired earthen oven that has been the heart of the restaurant for 30 years. Some two million flatbreads have been baked in the oven.

Thirty years ago, his wife Mary, (Girl George) Schenk was pregnant with their son Willis who is now one of the managers at American Flatbread and who will lead the demolition and reconstruction of the oven, basing it on how their collective understanding about earthen ovens has evolved and developed over the last three decades.

Demolition got underway this week, while George was out of town which Willis said was “probably a good thing.” The oven cooled for a couple of days after the restaurant closed on Sunday, October 17, before they took sledgehammers to the dome, removing the debris in wheelbarrows. The firebricks were removed along with the capstone foundation creating a clean surface for the mason working on the soapstone surface and the door arch. Willis and his crew will build the brick firebox and then work will begin on the dome.

Before the courses of handmade bricks can be placed, an armature to support and shape the dome is created from alder saplings which George, Willis and others gathered from Roxbury swamps. The saplings are buried in the sand that fills the base of the oven and are bent to create the geometry of the dome. A second set of saplings are placed opposite of the first one. They are lashed together. When the alder form is finished, it’s time for the dome.

The dome is built with handmade bricks made of clay, water, sand, straw and wood ash. (Fun. fact -- all clay for this oven, the original ovens and every oven American Flatbread has ever built have come from a vein at the Lareau Farm).

Each brick is kneaded together to merge and solidify with neighboring bricks, joining the straw pieces and each subsequent course of bricks is likewise kneaded together. That process takes four to six hours and then the oven will dry for four to five weeks. Once it is dry, fires will be lit inside it that burn out all the interior wooden supports.

When the oven is ready to go, Willis and the other bakers will learn its quirks and its personality with a few test bakes before the restaurant reopens in December. The bakers learn to use the cool flatbread crusts to manage the heat of the fire and the baking surface and also watch how fast the cheese is melting and the bottoms are browning to determine when to add wood to the fire.

When Flatbread reopens, depending on the course of COVID, it will be with takeout or takeout to eat outside on site by the fire, with the bar and bathrooms available. Dining room service was suspended this summer when the Schenks were uncomfortable with the conflicting/confusing state recommendations on masking with people outside of one’s household, but not when eating and drinking at restaurants. Flatbread also ran into front-of-the-house labor shortages, like many local hospitality businesses.

“We’re looking forward to having the empty restaurant full again. It’s sad to have it empty. It’s fun when it’s lively and full of people watching their flatbreads get made,” Girl George said.