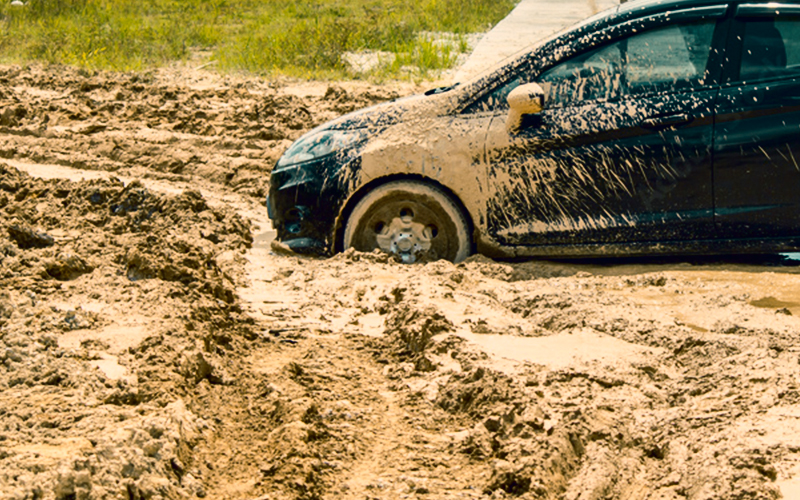 Waitsfield road commissioner Charlie Goodman thinks the worst of mud season is over. Fayston’s road foreman Stuart Hallstrom is less sure about it.

Both agree it’s been a mud season from hell with community members, visitors, delivery trucks, propane trucks, emergency service vehicles and town road trucks unable to navigate the roads many days over the last two weeks.

Repeated freeze/thaw cycles and lower snowfall drove the frost line deeper into Vermont and The Valley’s dirt roads meaning it is taking longer for the frost to thaw.

“Basic mud season is over. Most of what we’re going to see now is soft roads. Waitsfield is in pretty good shape; the frost is out. The shaded areas might be a bit of a problem for a while longer,” Goodman said.

“I noticed some spots, where sun never shines, like Brook Road, they’re still tough. But generally to have 40 degrees in the day and 30s at night is perfect. That’s just what you want for your thaw,” he added.

“But those were some pretty good mud holes we had. When you watch the grader, with 4-foot-tall tires sink down until you can only see the top of the tires – that’s deep,” he said.

Goodman said that in addition to Brook Road, there were spots on Airport Road where he saw some of the deepest mud holes he’s ever seen. He said the road crew was dropping 8-inch stone into it and that didn’t touch the problem. Ski Valley Acres also had some very bad spots he said.

“On Brook Road we were trying to fix one area and made another spot so bad we couldn’t get back to it,” he recalled. Goodman said that after the weather warms up and rain falls today, March 31, things should get better and he pointed out that the rain helps pull the frost out.

“I’ve never had so many phone calls about the mud as I have this year,” he added.

He credited this year’s mud season to the extreme cold in January and February (evidenced in people’s heating bills and wood usage) along with repeated freeze/thaw cycles. Hallstrom agreed, noting that it was extremely cold early in the winter with very little snow.

“And then when it thawed, it never froze at night and the frost kept going deeper and deeper at the beginning of winter. In 28 years here, this is the worst mud season I’ve ever seen,” Hallstrom said.

The worst spots he said were all shaded and some face north. Hallstrom said that town road crews worked to stabilize and grade the roads when temperatures dropped enough and said his team had put 60-80 loads of gravel into trouble areas in the last couple of weeks.

As for whether or not the worst of mud season is over, Hallstrom said, “Your guess is as good as mine. But summer is coming. And day by day some roads are getting better. But some are still breaking up.”

Send mud season pictures to This email address is being protected from spambots. You need JavaScript enabled to view it..