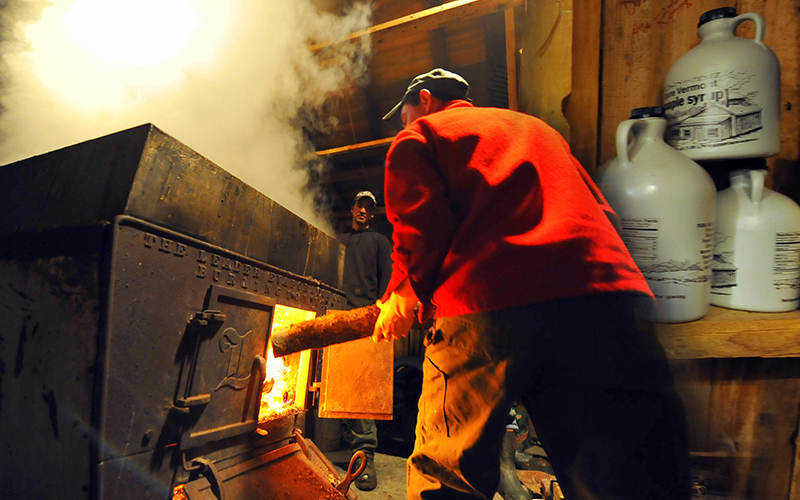 The smell of sap boiling is in the air, a telltale sign that it’s sugaring season in Vermont.

According to the Vermont Agency of Agriculture, about half of the maple syrup produced in the U.S. comes from Vermont. Vermont Maple Sugar Makers’ Association communications director Cory Ayotte said that in 2021, Vermont sugar makers produced 1.5 million gallons of syrup, compared to a record-breaking 2.2 million gallons in 2020. According to Ayotte, 2021 was a “pretty poor year” for sugar-making. A Vermont Business Magazine article said that 2021 maple production was down 21% from 2020. That article also stated that Vermont’s maple industry brought in $52.7 million in 2020.

“The last couple years Vermont was in a drought,” Ayotte said. “Trees were stressed. You need a healthy tree to give you a lot of sap.” He credited heavy rains last summer and this winter’s cold weather and freeze-thaw cycles with producing a better season this year. He also said the sugar contents of sap have been good this year, about 2%, compared to 1.5% last year.

Easty Long, a sugar maker in Fayston said of this season, “It’s a lot better than last year. The sugar content is better, too. Trees are supposed to make sugar in the summertime. Last year we had a lot of sunshine.” He added, “You need it to freeze every so often. We can stand [temperatures in the] 60s now and then, but last year it went into the 70s and that ended it.” He said he’s seen an average number of tourists visiting his operation this year. Eastman Long and Sons has produced 2,500 gallons of syrup in 2022. “We’re doing fine, it’s running real good today,” he said this week.

“It ended up being a decent season for our syrup yield, although the timing was a bit odd,” said Glenn Cahilly-Bretzin of West Hill Sugar Orchard in Warren. “We normally tap in the first week of March, since we do everything by bucket and want the tap holes to be fresher for the end of the month when, traditionally, the majority of our syrup production happens. This year we missed the two-day run at the end of February with eyes on the freeze during the first week of March and tapped March 7 with our first boil on March 11. The sap had less sugar content than we might expect for early season, and we did not draw/produce any light color delicate flavor 'Vermont Fancy,' only medium amber on the lighter end of the spectrum,” he said.

“With the really warm temps mid-March, the sugar content in our sap dropped a lot and we went into making dark syrup sooner and very dark by the third week of March. We feared that the season was over at that point, but the cold snap March 26–28 seemed to hold off the buddiness in sap and keep things rolling last few days of March. Sugar content in the sap also seemed to come up a little, although we were still making very dark. By April 2-3, sugar content in the trees was generally too low to warrant the effort and wood so we pulled the taps, although only a couple trees had truly gone buddy. The larger trees in the orchard were sweeter than the smaller trees, on average,” he continued.

“Our season ended about a week-and-a-half to two weeks earlier than it did in previous years. Compared to reports of sugar makers from last year (West Hill Sugar Orchard did not sugar last year), this year has been much better, though not as good as our 2019 or 2020 seasons during which we ran out of wood to burn before the sap totally went buddy. As for tourists, we were more hesitant to advertise as prominently as we have in the past due to lingering pandemic concerns so can't really say how the poorer skiing conditions impacted tourist flow, though definitely had fewer visitors coming to the sugar house.”