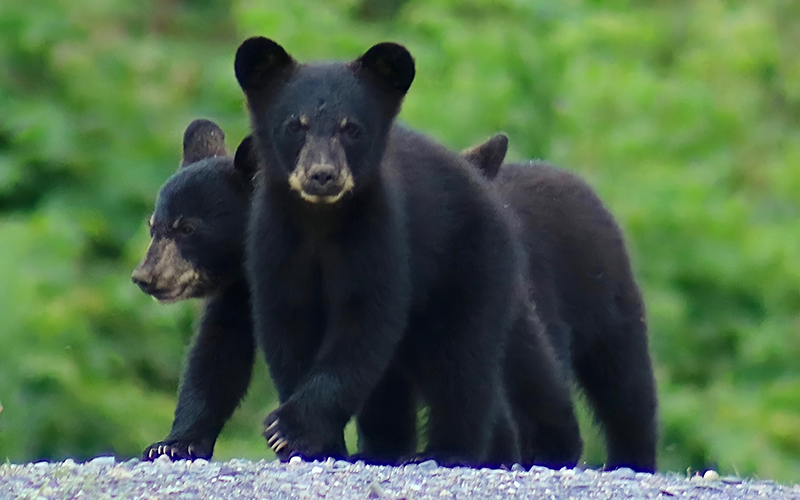 The March 30 event was the first of a series of presentations by a coalition of local conservation commissioners, Friends of the Mad River and a Sugarbush employee committee. The presentations are aimed at addressing growing black bear concerns in The Valley.

Comeau opened the presentation with a crash course in what bears need to thrive and how that translates into land use and conservation efforts.

“We think about conservation needs from an entire ecosystem down to individual species, and we prioritize black bears because they serve as umbrella species. To be successful they need a variety of things throughout the year; they need wetland habitat, young forests, shrubby brushy areas where berries grow and they need access to mature forests. These habitats aren’t next to each other so they need to be able to navigate between these habitats,” she said.

“We look for important bear habitat in assessing new development and work with developers on mitigating the impacts on bear habitat. We work with private landowners on the issue as well,” she said.

Her team also works hard promoting co-existence between people and bears which involves technical assistance and information about how to avoid future conflicts.

“It can’t just be those of us who work on this for the state trying to solve the conflicts. We need all Vermonters to take an active role,” she said.

Bears are long-lived mammals and the oldest bear recorded in Vermont lived to be 39 years old. Most live to be about 30. Comeau said they are very intelligent and problems solvers and have long memories. Their strongest sense is their sense of smell and they perceive the world through their noses, she explained.

“They eat a lot of insects. They’ll eat meat, deer fawns and moose calves. They’ll prey on nesting birds and bird eggs as well. Those foods are not available year-round and are only available in certain habitat types,” Comeau explained.

Once they are out of their winter dens, they forage in open wetlands in the spring, on ski slopes turning green and in open fields. In the summer they forage in wetlands and young forests and under power lines looking for berry producing bushes. In the fall they seek out mature forests looking for beech and hickory nuts along with acorns as they try to pack on pounds before hibernation.

Bears go into hibernation mid to late November with their yearlings. If a bear is pregnant she will give birth from mid-January to early February.  The family will leave the den in mid-April or earlier as climate change is making for shorter winters.

Bear and human interactions happen when natural food sources for bears are scarce or when their noses or good memories bring them into people’s yards and onto back porches seeking garbage, compost and bird feeders.

“If bears have gotten easy meals in our yards that leads to habituation. They learned that they don’t need to be so wary. In Vermont birdseed and garbage are the top two things that attract bears. Chicken, beehives and compost are also key attractants. But it’s really bird feeders that are the gateway drug for bears,” Comeau pointed out.

“People think bears at the birdfeeder is a benign issue and that it’s cool to see bears from the kitchen table and to see bear cubs. Every time they get a bird feeder it shifts their behavior. It teaches cubs that backyards are a place to get food. Taking feeders in at night doesn’t work either. The best option is not to feed birds when bears are active, from April 1 to December 1,” she said.

Garbage that is not properly stored is another big attractant and can kill bears when they consume plastics and the rest of the nasty stuff that is in garbage. Improperly stored garbage also leads to property damage, Comeau said. To keep bears out of garbage, odors need to be managed and it needs to be stored in bear resistant containers. It terms of compost, it’s the same issue, proper storage and the correct ratio of food to brown/green material. That ratio is 1 part food waste to 3 parts brown/green material.

“If the bears continue to get into your compost, consider dropping it off at a compost station as a transfer station for a while,” she added.

She urged people with bees and chickens (and even compost bins) to install electric fencing around those areas.

“Bears are dying every year over conflicts with humans whether it is around garbage, chickens, dogs or dying crossing roads. If they’re foraging in our backyards, it means they’re crossing roads,” Comeau said.

Vermont’s population of black bears is relatively stable with 4,600-5,700 bears estimated from 2016-2019.There are some 750 bear/human incidents each year and some 163 bears killed by cars or in conflicts each year. The number of human/bear conflicts are most likely seriously under-reported, Comeau explain

The Valley is a hotspot for human/bear interaction she said noting that in 2019 there were 26 conflicts reported in Duxbury, 49 in Fayston, 27 in Moretown, 30 in Waitsfield and almost 100 in Warren.