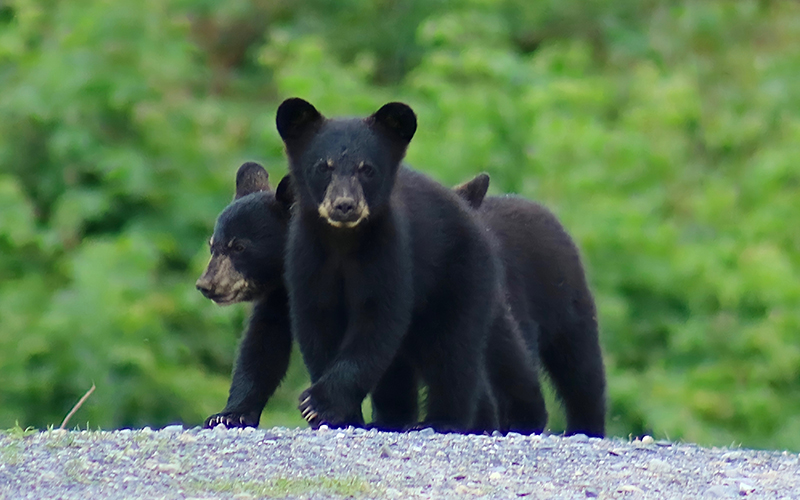 A Bears and Birds webinar was recently hosted by Audubon Vermont in partnership with Vermont Fish and Wildlife to better understand how to coexist with bears in Vermont. The webinar also addressed alternative ways to attract birds without using bird feeders, which lure bears into residential areas.

The webinar was led by Audubon Vermont’s Gwendoyln Causer who was joined by Vermont Fish and Wildlife biologists Doug Morin and Jaclyn Comeau.

Comeau began the webinar by providing facts about bears and explaining the detrimental effects they experience as a result of eating from seemingly harmless bird feeders in the backyard.

A bear’s diet mainly consists of the fruits produced by plants also called mast. Comeau referred to bears as “optimistic omnivores,” meaning they have a flexible and diverse diet. “They are always willing to try a new food,” said Comeau. This exploratory behavior becomes an issue when bears are enticed by bird feeders and utilize their impeccable sense of smell to lead them to their next meal.

Although bears often prefer to eat their regular diet of mast, environmental conditions and natural curiosity lead them into backyards in search of a snack. Each time a bear enjoys a successful meal courtesy of a Vermonter’s backyard, it becomes a learned behavior which can cause them to rely more heavily on food that is inaccessible in the wild.

Why does this matter?  Practically all of Vermont can be considered bear country and over the past six years the amount of human-bear incidents has gone up drastically from 230 reports a year to 750.

“We all need to step back and think ‘what can we do as individuals to help improve coexistence between people and bears?’” said Comeau.

So, what can people do to help? Avoid feeding birds when bears are active. Comeau recommends taking bird feeders in by April and keeping them inside until December.

An alternative to using bird feeders is planting native plants to naturally lure birds into the yard in a bear-friendly way.

Audubon Vermont’s Gwendolyn Causer discussed the importance of planting native plants in Vermont. Native plants have a plethora of environmental benefits including directly reducing greenhouse gas emissions and helping to build resilient bird populations. Birds rely on native plants for the majority of their food and when these plants are replaced by exotic species, it can be life threatening.

Causer described the feeding patterns of the Carolina chickadee as an example of how important native plants are to bird survival. During the nesting season, a chickadee will feed its young over 9,000 caterpillars before they leave the nest.

Causer compared two types of trees, the oak tree which is home to over 550 species of caterpillars and the ginkgo tree which houses just five species.

“If you think about a bird that is out there searching for food for its young, that's going to be a lifesaving difference if they're going to land on that oak tree and find caterpillar after caterpillar,” said Causer.

Before people begin your spring gardening, Causer suggests visiting the Audubon Vermont’s native plant database which provides a list of native plants specific to each location. Within the database people can even alter their search to customize which plants they are looking for or what birds they would like to attract. The database also provides other helpful information including a list of nurseries in each area that sell native plants.

Causer urged Vermonters to take a stand to protect the bird population. “I want you to be taking action to put native plants for birds in the places that you have influence over and also think about taking action beyond your own yard … consider the connections you have for working together and collaborating to make change,” she said.

This event was recommended as part of the education component of the Black Bear Initiative, that local conservation commissions, Sugarbush employees and other community organizations. The next event is Bear with Us: Living with Black Bears in the North Country: A virtual presentation with Sue Morse of Keeping Track, hosted in partnership with Northeast Wilderness Trust and the Mad River Valley Black Bear Initiative. It takes place Tuesday, May 10 at 5:30 p.m.

Blow is a reporter with UVM’s Community News Service, which pairs college journalists with community newspapers.