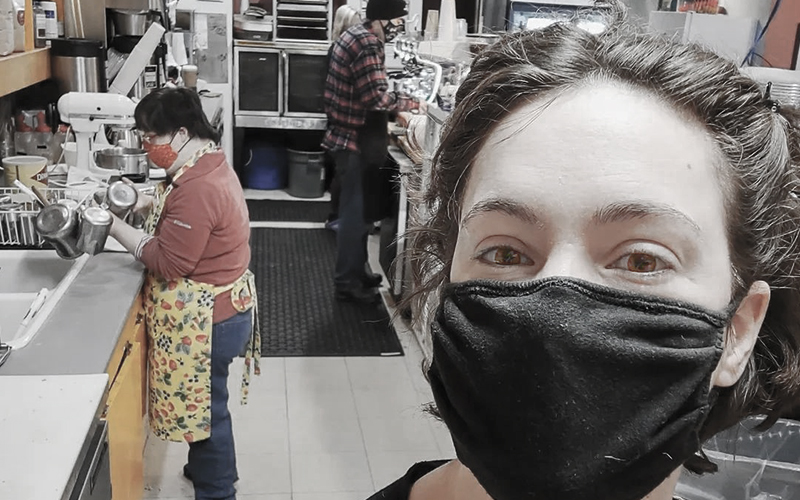 Three Mountain Café owner Maggie Carr and her husband Ryan are in search of a year-round three-bedroom rental house in The Valley.

Maggie Carr’s mother Suzan Doucette lives with them and helps at the Waitsfield coffee shop, as does Ryan Carr. They’re seeking a three-bedroom house so that they can also provide housing for a J1 visa worker.

They’ve been living in Warren on Lincoln Gap Road since August 2021.

“Our landlord has adult children and one got married and that son is going to move into our house. She’s been renting the house off and on and waiting for one of their kids to want it,” Ryan Carr said.

“Our lease is up in August, but she is being super flexible with us, hoping that by the end of the year her son can move in,” Maggie said.

Like so many people impacted by the lack of housing options in The Valley, they’re tuning in to Craigslist and Zillow and seeking a place via word of mouth and community bulletin boards.

“I’ve also been asking all of our regular customers as well,” Maggie Carr said.

“We’ve connected with a few and are probably in the process of connecting with more. Out of the places we’ve found so far, one wanted to save it for monthly vacation rentals,” Ryan Carr noted.

They have two dogs, which, they said complicates the issue of housing even more.

They would prefer to stay in The Valley but are considering Northfield, Middlesex and Waterbury and may begin to look further, Ryan Carr said.

“We really want to stay in The Valley because we’re up so early with the business,” Maggie Carr added.

Prior to purchasing the coffee shop and moving to Lincoln Gap they were living in the owners’ quarters of an inn that they managed.

When they were first looking for a place to move to in The Valley, Maggie Carr used AirBnB to try and find landlords who might be persuaded to offer a year-round lease.

“I got a lot of sympathy from the people I contacted, even though it felt desperate to be reaching out that way. We’re not at the point with this move – yet,” she said.

“As young business owners in The Valley, the whole thing – crawling around the next five years with the housing situation is tough. Some couples get married and buy a house and have kids. We’re not doing things in that order. And what are we going to be able to afford here, ever?” she asked.

“It feels dicier and dicier. Did we choose to own a business in a place that can’t really have us? If we’re going to have to leave The Valley and drive 35-40 minutes – are we going to be able to open so early?” Maggie Carr asked.

Ryan Carr said that they can see and understand the fact that The Valley needs a certain amount of AirBnB capacity to have enough people to keep restaurants, shops and coffee shops open.

“We can’t get by with just locals,” he said.