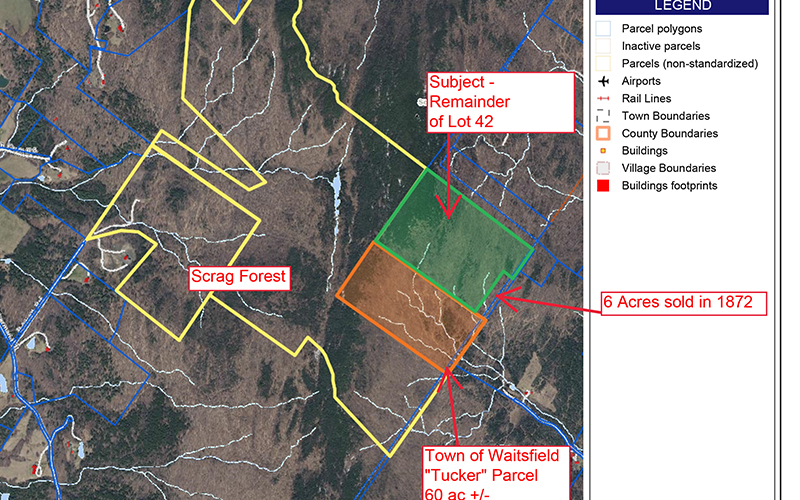 The Waitsfield Conservation Commission has been grappling for quite a while with the issue of a parcel of land, Lot 42 -- a large land-locked parcel of land near the summit of Scrag Mountain with undetermined ownership and which was not part of the town’s grand list for many years.

Waitsfield Conservation Commission chair Curt Lindberg was one of those who helped unravel the mystery. He reported that in June of 1866, a man named Willard Rice sold to Elizabeth Steele 60 acres of his 150-acre Scrag mountain woodlot. Later in March of 1872, he sold 6 acres of the lot to Henry Culver. Through these two transactions he created a series of mysteries, unexplained events and unusual actions which took 156 years to resolve.

Rice’s land was in Lot 42 of the original lotting plan of Waitsfield and consisted of 150 wooded acres located east and a bit south of the Scrag summit. It is designated a glebe lot, granted under the authority of the British government for the use of the Church of England and which is publicly owned land where title is held by the town but which could be leased to private interests with taxes payable (in this case) to the grammar school, Lindberg explained.

Rice’s 60 acres to Steele moved through several owners and is now owned by the town of Waitsfield, received through a donation from the Tucker family of Northfield. Earlier research in the Waitsfield property map records had disclosed a large area of Lot 42, about 84 acres, was not owned by anyone and that the Culver 6 acres was still in his name 150 years later, two lifetimes after he purchased it.

“Thus, the mysteries: What happened and who are the owners here?” Lindberg asked.

In part because these two parcels abutted or were near the Scrag Town Forest, Waitsfield’s Conservation Commission took on the task of resolving the question. Land records, town Grand List, Vermont property and estate law research ensued, together with identification of heirs, filings with the Washington County probate court and on-site property boundary identification.

“The 84 acres is a story in itself. In 1912 it was sold as part of a larger parcel to A E Covell. Covell passed away and his wife Clemmis was appointed administratrix of his estate on October 13, 1914. The inventory of A E Covell’s estate includes the 84-acre parcel. Then the Culver history replays itself – no more deeds – no record of Clemmis Covell ever selling the piece. Clemmis Covell moved to Michigan,” he reported

In August 1941, the probate court issued a decree of distribution, recorded in Northfield but not in Waitsfield, which lists remaining A E Covell assets but makes no reference to the 84 acres in Waitsfield. The 84 acres was in the estate in October, 1914, but out of the estate in August, 1941, with no records found as to its disposition in the 27-year interim. Clemmis Covell’s license to sell, signed by the court in October, 1914, was not recorded in Waitsfield until February, 1916, and the decree of distribution was signed in August, 1941, but not sealed at the court and recorded in Northfield until 13 years later in September, 1954, Lindberg explained.

“For both the Culver and Covell parcels, no claims have been made by anyone to ownership or possession and previous owners have long since disappeared. Due to the absence of owner names, the lands have not been listed to anyone, no property tax invoices have been sent, and no taxes have been paid.  Curiously, for 100-plus years the 84-acre Covell parcel was not listed to anyone and no taxes paid, even when it was owned by Covell and some of his predecessors in title,” Lindberg said.

“Many Vermont statutes were reviewed regarding how to address this situation, and contacts were made to the probate court. But nothing seemed to fit the Scrag complexities or satisfy the court. Contacting Covell heirs seemed logical, but reopening the long-closed Covell estate would be very complicated and some requirements to do this could not be met,” he continued.

In a eureka moment of Vermont statutes research, the answer appeared.

“This law fit! All of Lot 42 is glebe land. The Waitsfield Select Board has responsibilities. No evidence was found documenting transfer of title. No one has claimed the properties. No one is paying taxes. Conclusion: The Culver and Covell lands have not been appropriated (disposed of) according to law,” Lindberg reported.

The accompanying law, Title 24 VSA – 2402 states: The Select Board shall be entitled to the possession of such lands, except when the same have been otherwise disposed of according to law. They may commence, prosecute, or defend, in the name of the town, any action necessary to recover or protect such possession, or recover damages for injuries done to such lands.

“The select board is “entitled to the possession” – it doesn’t get any better than that,” Lindberg noted.

“A notice of possession has been prepared and approved by the select board for each of the Culver and Covell lands.  Ninety acres will be added to the Scrag Mountain Town Forest. The 129-year Culver and 108-year Covell mysteries have not been fully solved, but ownership has been resolved in favor of us, the public,” he added.

The effort required supportive fortitude by everyone on the Waitsfield Select Board and Conservation Commission, Lindberg added.