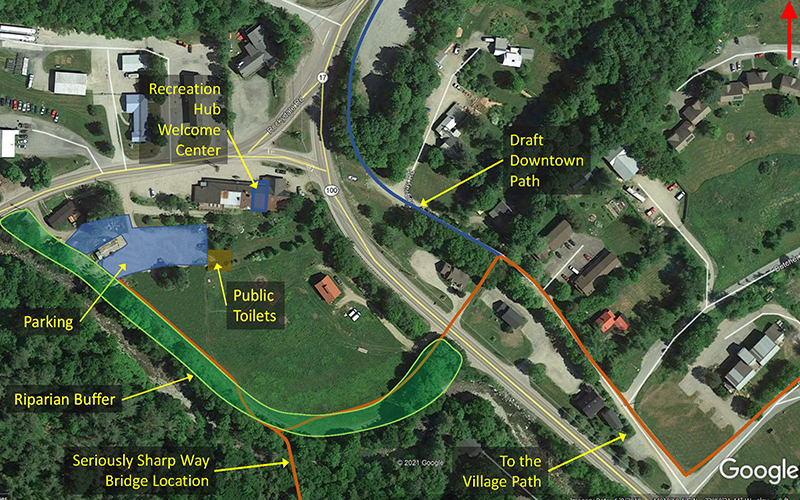 The Waitsfield Select Board heard from Mad River Path executive director Ross Saxton about plans to create two new crosswalks in Waitsfield to get people using the new Mad River Rec Hub into the downtown area.

At a May 23 meeting of the select board, Saxton explained the new rec hub, funded by a $409,000 Vermont Outdoor Recreation and Economic Collaboration (VOREC) grant. The rec hub will include a visitors center at the Localfolk Smokehouse a, 50-80 space parking behind the building, interactive information, restrooms, and a bridge over the Mill Brook to access the recreation trails in the Howe Block and beyond. It will also feature new crosswalks to allow people to safely exit the Route 17/100/Bragg Hill intersection so that they can access Irasville and the village.

Saxton explained the current plan to have people leave the rec hub by a path that runs south and east around the edge of the field behind the Smokehouse, with people crossing Route 100 via a new crosswalk that routes them between the Jamieson Insurance and Mad River Real Estate buildings. From there people would ascend to Dugway Road and follow that to a hill immediately south of and adjoining the Blue Stone Pizza driveways.

From Blue Stone, people will follow a new section of the Mad River Path that runs along the east side of Route 100 in the VTrans right of way until they cross Route 100 by the south entrance of the Mad River Green Shops. After that, Saxton told the select board, people can cycle or walk on the town’s sidewalks all the way through the north end of Waitsfield Village.

He explained how changes in elevation to get to Dugway Road and to get up the hill from the end of Dugway Road to Blue Stone would be handled by using boulders and fill to lower the grade. The work on the hill between Dugway Road and the Blue Stone parking lot would require some tree cutting, including several mature ash trees. Those trees would have to be removed in the not too distance future due to the threat of the emerald ash borer.

Board member Chach Curtis asked if Saxton and his colleagues had considered alternative routes such as one that leads from Fiddlers Green to the back of the Irasville Cemetery or a way to cross Route 17 from the Smokehouse parking lot.

Saxton said a crosswalk across Route 100 between the Jamieson Insurance and Mad River Valley Real Estate buildings could connect to what is called the Fiddlers Green Walk but said that people often won’t take a longer loop such as this when downtown is visible from where they are starting.

Board member Brian Shupe noted that there is another section of path that runs from Mad River Meadows and comes up to Route 100 between what will be Addison West and a private residence owned by the Clayton family.

Barb Clayton, that family’s representative, spoke to the board and explained her family’s concerns.

“We support additions of crosswalks and the rec hub. And we’re the only private home and property to be impacted. That route will encompass entire frontage of our property with a 5 foot path and 3-foot-wide green space. We’re concerned that path will be unsightly and it will create privacy issues and impact our home. The path will only be a few steps from our front steps and we feel it will be intrusive to our privacy,” she said.

Complicating the planning process is the fact that VTrans spent many years considering ways to improve the Route 17/100 intersection only to abandon that process about 20 years ago. VTrans is again interested in working with the town on how to improve that intersection. Pedestrian circulation is one component that VTrans will be looking to improvement along, with the fixing the current alignment which is considered unsafe. That project may or may not include realigning the Route 17 bridge over the Mill Brook which was one consideration in the prior effort. That review will begin this summer.

For the path association plans to proceed, the town will have to agree to submit a 1111 permit application to VTrans on behalf of the path. VTrans will need a survey of the proposed alignment of the new crosswalks and path section in the coming weeks, Saxton explained.

Board member Jordan Gonda asked if it would be possible for the board to have a site visit to the new proposed plan segments and other board members expressed the same interest. Saxton said it would be arranged. Because the recipients of the VOREC grant have two years to complete the work, Saxton suggested that there was time for VTrans to come review the Route 100/17 intersection issue and even select a new alignment. VTrans may view the current path proposal to get people across Route 100 as having addressed pedestrian safety or work with the town and path to development a different one based on intersection re-alignment.