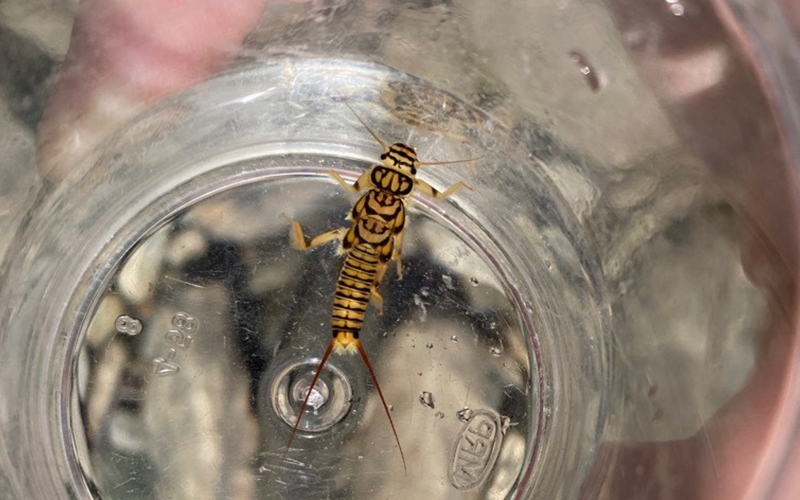 On June 26 and 27, 16 teams of Mad River Watch volunteers visited their field sites to collect important data and make careful environmental observations for the first time this year. This article is part of an ongoing series that shares highlights from this field work as well as lessons learned from the past 38 years of Friends of the Mad River’s (FMR) Mad River Watch program.

What might look like just the rocky bottom of the stream is actually teeming with life. This summer, several groups of Mad River Watch (MRW) volunteers have been methodically turning over rocks to find benthic macroinvertebrates. “The term benthic references the bottom level of any water body and, in this case, refers to the fact that these creatures live on the bottom of streams, amongst the rocks and cobbles,” said FMR stewardship manager Ira Shadis. “Macro means you can see them with the naked eye, though a magnifying glass can help with identification. And invertebrate means they don’t have spines, but rather depend on some other physical structures, like an exoskeleton, to keep their bodies stable and together.”

“The state of Vermont collects BMI (benthic macroinvertebrate) samples every fall from streams around the state and then spends the winter classifying what they find. They do this because BMIs are what’s known as a ‘biological indicator’ and the particular species and quantities of each found can tell us a lot about the water quality where they were sampled from,” said FMR director Corrie Miller. “Some of our Mad River Watch volunteers are practicing the methods used in the official state sampling and will likely be involved in that effort come September.”

“BMIs like Stoneflies are intolerant to pollution and require clean water to survive. In contrast, midges (which are the larval stage of flies) are fairly tolerant of pollution. Volunteers have found examples of horse-hair worms, mayflies, and stoneflies,” she explained.

“So much life above and below the water! We did our first observations of benthic macroinvertebrates and were amazed at what we found: aquatic earthworm, mayflies and stoneflies big and small, and one stowaway snail,” said Mad River Watch volunteer Julie Westervelt.

These organisms were found just upstream of the Warren bridge and suggest that this stretch of the Mad River has good water quality, Miller pointed out.

In addition to noting insect, bird, and other wildlife species, volunteers continued to record data about the physical and chemical characteristics of their field sites. This pair of sampling days covered a wide range of conditions, with air temperatures in the 90s on Sunday and strong rain on Monday. All of Sunday’s volunteers reported low water levels, whereas Monday’s volunteers reported moderate water levels with several sites showing muddy or silty water. Water temperatures on both days ranged in the low 60s.

On Sunday late afternoon, hours after MRW volunteers had returned from the field, people were still enjoying refuge from the heat at the river along the West Greenway in Waitsfield. Two people separately reported to Friends of the Mad River that they had noticed particularly murky, blue/green-tinted water. “Whether you are a Mad River Watch volunteer or not, we can all make observations about the river and help build a stronger understanding of the health of the watershed,” Shadis said.

“As concerned community members, they understood that water laden with sediments (called ‘turbidity’) didn’t make sense when it hadn't rained in days, and was likely a sign of something going on upstream,” he added.

FMR’s policy, when receiving these calls, is to try to locate the problem and connect with the landowner to resolve it. “There are times when Friends of the Mad River can’t respond quickly enough to locate the problem and times when there’s a bad problem that should be addressed right away,”  Miller added. FMR encourages community members to report possible water quality violations to Vermont Department of Environmental Conservation at https://dec.vermont.gov/enforcement. FMR also requested that, if a community member noticed the Mad River cloudiness on Sunday before the heavy rains overnight, to contact them at This email address is being protected from spambots. You need JavaScript enabled to view it. to help FMR learn more.