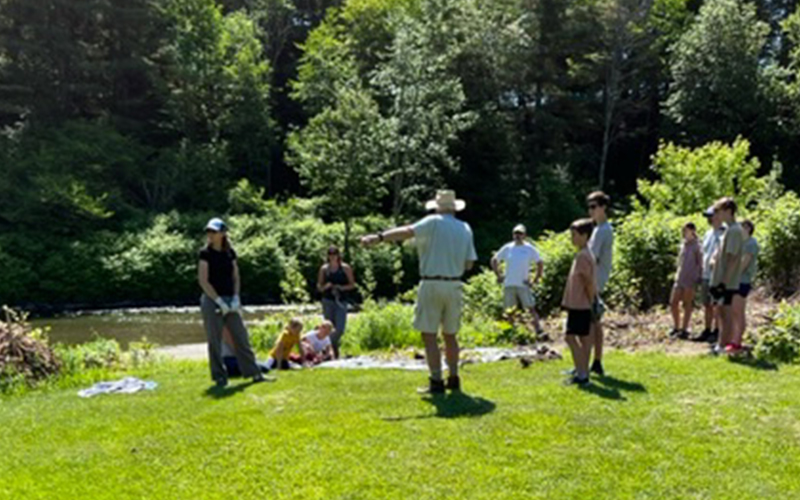 Five years ago, people driving up Roxbury Gap would have seen significant, large, tall patches of Japanese knotweed along the sides of the road. Thanks to the efforts of the Warren Conservation Commission, drivers heading up the gap will see almost no knotweed, thanks to the repeated cutting of the invasive species by Warren Conservation Commissioners, college interns and volunteers.

“We’re making progress. It's wonderful to see, now you drive through East Warren and you don’t see it. It’s all being managed, but it takes a while and you just need to be persistent,” Coleman said.

By consistent, he means demystifying knotweed and demonstrating that repeated cutting and digging out of roots is effective over time in weakening the plant to the point where it stops spreading and dies.

“On Roxbury Gap there were 26 pretty signifiant sites and while its still there, you don’t see it. We’re down to the last few little shoots coming up,” Coleman said.

In addition to repeatedly cutting and digging out the roots, Coleman said the conservation commission is working on a pilot at the Sugarbush snowmaking pond where the knotweed is repeatedly mowed.

“Mowing is a management technique and the mowing site on the access road to the snowmaking pond is a demonstration site. The town is mowing its parks now and at one of them, Quayl’s Bend, there’s a great example of how you can manage knotweed along the river,” Coleman said.

This year, Warren again has five college interns working through August on knotweed eradication, communications and public outreach. This year there is a renewed emphasis on mapping and members of the conservation commission, volunteers and the interns are working on a more advanced mapping project to identify all the knotweed that is found along the Mad River from its headwaters as it flows north through Warren.

“This year we are taking on the very top of the Mad River working with Vermont Forest Parks and Recreation on about 12 infestations along Route 100 in the Granville Gulf. Luckily the Warren side of the Gulf isn't too overrun yet, but to see how bad it can get just go to the Granville side in the upper White River drainage,” Coleman said, noting that knotweed spread extremely fast after Tropical Storm Irene in 2011 as the state worked to repair roads damaged by flooding.

“It will take us a couple of years to eradicate these small patches which are a result of VTrans repairs to Route 100 after Tropical Storm Irene. These sites are and would continue to be knotweed spreaders at the very top of the Mad River if we don't get after them. Luckily we now have permission and will be getting after it,” he added.

This year’s interns are working on manual pulling as well as the GIS mapping of knotweed infestations in Warren. Coleman said they were working on simple, central way for people to report infestations. The Inaturalist app had been used in the past, but was bulky, he said, requiring people to create accounts and click through many pages to report patches.

Those interns are Natalie Bingham, Samuel Fisk, Peter Larkin, Ingrid Westervelt, and Riley Schmidt. In addition to their work on eradication, communication and public outreach, they are also managing an Instagram page for the conservation commission as well as working with the Waitsfield Conservation Commission once a week as well.

With the local conservation commissions, the interns are hosting two community days each week, one in Warren and one in Waitsfield, working alongside local volunteers demonstrating how to cut and extract knotweed rootballs. In both towns and in Fayston, community members have begun adopting a knotweed infestation to manage for the summer. The Warren community day is Wednesday from 4 to 6 p.m. The Waitsfield community day is Thursday from 4 to 6 p.m. Locations are announced via social media and community bulletin boards.

This spring in Fayston, the conservation commission requested funds from the select board to mirror the work underway in Warren and Waitsfield.

“We are seeing an increasing infestation of Japanese knotweed (a highly invasive species) along Fayston’s roads and streams, spread by road machinery and stream currents. The FCC has put hundreds of hours into trying to manage knotweed, but a more concerted and collaborative effort, akin to that in Warren and Waitsfield, is required. Warren and Waitsfield have learned a great deal about how to successful eliminate knotweed patches and we can learn from their experience. Funding would support an inventory of all upland knotweed patches, determine priority for removal based on the feasibility of elimination (i.e., resources won’t be wasted if the patch is a lost cause!), organize volunteers, and (perhaps) fund a summer youth crew to remove the highest priority patches,” Fayston Conservation Commissioners wrote in a funding request to the select board.

The select board did authorized $5.000 and the conservation commission hasn’t finalized specifics of how those funds will be used.