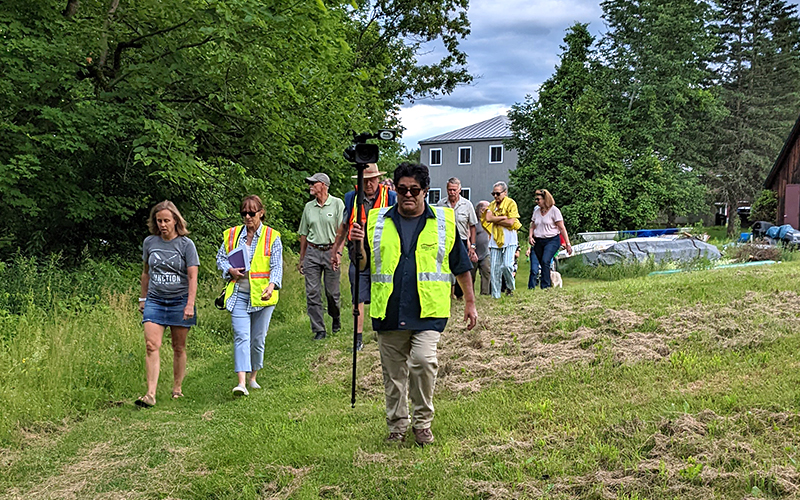 Twenty-two people turned out this week to walk the proposed pedestrian path which will connect the Mad River Valley Recreation Hub to Waitsfield.

On Monday, June 27, members of the Waitsfield Select Board walked the proposed route for the new section of the Mad River Path with staff from the town of Waitsfield, Mad River Path, and VTrans and members of the public. Mad River Path executive director Ross Saxton led the group of 22 residents and local business owners from the Northfield Savings Bank to Dugway Road, through the woods by The Blue Stone where the proposed path will be built. Saxton showed the sites of two proposed crosswalks across Route 100, in front of Addison West (formerly The Store) and by Mad River Valley Real Estate.

The Mad River Valley Recreation District (MRVRD) has received a $408,019 grant from the Vermont Outdoor Recreation Economic Collaborative (VOREC) to create the Mad River Valley Recreation Hub. The hub will be located behind Localfolk Smokehouse at the intersection of Routes 100 and 17 in Waitsfield. According to the MRVRD’s website, the hub “will direct pedestrians, bicyclists and other visitors to local businesses, encourage locals to get outside, and increase community participation in recreation.”

Part of the project is creating a 5-foot pedestrian path that connects the hub to the downtown area. MRVRD’s website says, “A critical component of the project includes a safe pedestrian crossing of VT Route 100, linking the hub to Waitsfield’s walkable downtown, including the Great Eddy covered bridge, through a new section of the Mad Path called the Downtown Trail.”

At this week’s site visit, Saxton said sections of The Blue Stone parking lot will need to be repaved as the path is built. Blue Stone will cover the cost of pulling up the pavement and the project partners and the business will split the cost of new materials and repaving both entrances to the parking lot. Saxton said it will make the entrances safer in addition to providing pedestrians with a safe path along Route 100.

The project partners considered an alternative crosswalk at the bottom of Bragg Hill where Route 17 meets Route 100 but determined the crosswalk across Route 100 by Mad River Real Estate was safer and easier to implement. Some residents present at the site visit expressed concern over vehicles’ excessive speeds along Route 100.

A question also came up about whether VTrans is considering redoing the intersection of Routes 100 and 17 and whether that might have an impact on the project. A VTrans representative said they are looking into that, but any potential changes to that intersection are at least five years away. “Will these plans impact that? That’s the big question,” said Waitsfield town administrator Annie Decker-Dell’Isola. “How do we grapple with both things at once?”

A retaining wall will be built along the path, which will partially run through the wooded area by The Blue Stone parking lot. Some trees will need to be removed. A pollinator garden is also in the plans. The path will follow Dugway Road to the proposed crosswalk.

“I’m not enthusiastic about a mob in front of my house,” Dugway Road resident Jim Dodds said. “It’s a big change.” Another local businessperson added, “I’m really, really for this path,” but, noted the potential for accidents along the section of Route 100 where the proposed crosswalk would be, saying it’s a safety concern.

The project is due to be complete by December 2023, per the terms of the VOREC grant. As the cost of materials have risen, the project partners are assessing whether additional funds will be needed to complete the project.

A map of the proposed path may be found at https://www.mrvrd.org/rec-hub.