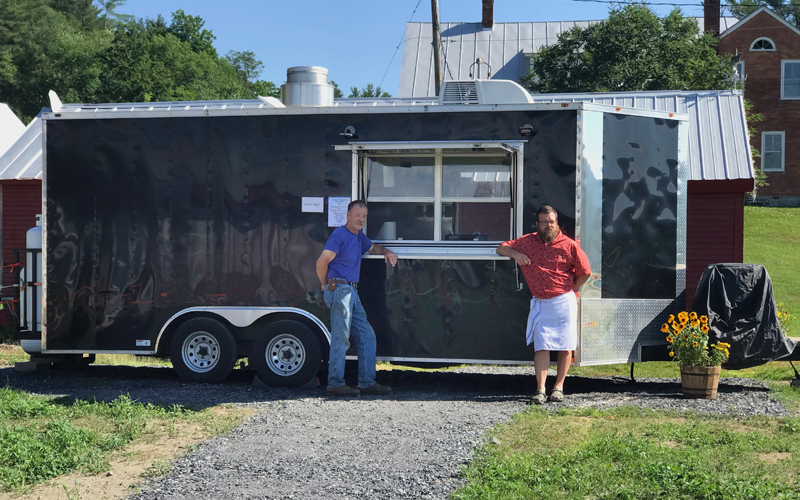 Elwin Neill and his son Forrest Neill have opened a snack bar/food truck at the family farm on North Road in Waitsfield.

The Feedlot at the Neill Farm is open Thursdays, Fridays and Saturdays from 4 to 8 p.m. and offers hot dogs, hamburgers, cheeseburgers, hand-cut French fries, seltzer and carbonated juices. Coming soon will be Wilcox Ice Cream from Arlington, Vermont, the oldest ice cream company in the state, Elwin Neill reported. The snack bar will be open May through mid-October.

“Forrest and I have been talking about this for years. We first discussed it after we got rid of our dairy cows. We talked about it even more after Maynard’s Snack Bar closed. Finally we decided that if we’re going to do it, we ought to try it. Then we found a food trailer in Rhode Island,” Neill said.

Forrest Neill does the cooking with the help of his wife Hannah Neill and a friend. Elwin Neill hand cuts the potatoes for the French fries.

When the Neill Farm sweet corn is ready, it will also be available from the snack bar. Additionally, the Neills will be offering specials such as pulled pork sandwiches, brisket and other specials, all created from Neill farm products.

“We’re working with Babette’s Table at the food hub on getting our own hotdogs made and in August we’ll start with small batches of bacon hot dogs at the food trailer,” he said.

“We’re keeping it simple and local. The potatoes will come from a farmer in Granville,” he added.

The hot dogs and hamburgers are served on old-fashioned soft white buns.

“We wanted a bit of nostalgia with the buns and we wanted buns that won’t hide the flavor of the burgers and hot dogs,” Neill said.

Neill said that grilled cheese sandwiches would likely be offered along with black bean and falafel burgers from Vermont Bean Crafters.

After a soft opening, the business was open last weekend and the response was unbelievable, Neill reported.

“We went through almost 100 pounds of potatoes in three days and 40 pounds of hamburger in 12 hours of being open. This week we’re going to offer a smoke brisket with mac and cheese special,” he reported.

Neill said an important factor in he and his son’s new endeavor is new state legislation that encourages and supports agri-tourism, which their business is considered. To open they needed water testing and health inspection and a caterer’s permit but not other state or local permits.

“That was an incentive for us,” he said.

Neill said that the snack bar will also help him manage his beef and pork inventory as restaurant orders have been unpredictable due to the pandemic and now to worker shortages that are keeping some restaurants closed more frequently.

“This last year has been one of worst years for predicting what restaurants want or take. There have been times I haven’t utilized everything from week to week. This gives added value to the meat we have and allows us to use things that restaurants don’t use. Lots of times I don’t have demand for all the burgers. In three days last week, we utilized almost as much beef as my best restaurant does in a week.