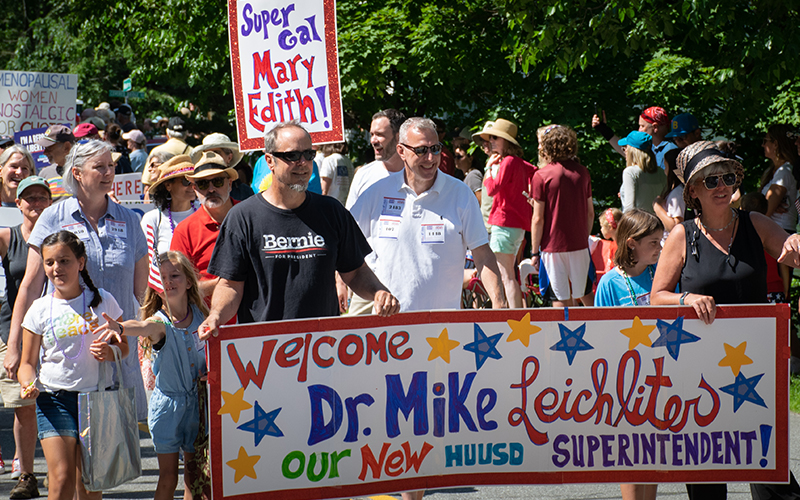 By Erika Nichols-Frazer and Lisa Loomis

Editor’s Note: This is part one of a two-part series introducing new superintendent Mike Leichliter to the community.

Dr. Mike Leichliter, the new superintendent of the Harwood Unified Union School District (HUUSD), has hit the ground running. He and his wife marched in the Warren Fourth of July parade, he visited the Waterbury Farmers Market for the first of several meet and greets and is looking forward to further conversations with community members. He recently met with The Valley Reporter and the Waterbury Roundabout.

Prior to officially beginning work on July 1, Leichliter conducted a community survey to determine the district’s strengths, potential areas for improvement and prioritize goals based on the community’s needs. He said so far, he has received approximately 600 responses to the survey, which he plans to keep open until the end of August.

“I think what I've heard from responses in the survey is a hopefulness that we can come together and that we can find some solutions to the challenges that our world faces as well as across the state of Vermont, across the country,” he said. “It's been a challenging couple of years because of COVID. When you look in this particular community, it's been challenging because of the consolidation of schools. There were tragic deaths of students [in 2016] so there's been a string of challenges, trauma, conflict, and then I think that's been compounded with COVID. I've been working through the goals and been getting more input. What I want to do is tabulate the responses in some summary fashion and then distribute that publicly. I want to share those [findings] with the school board, with the community, and say ‘this is what we've gleaned from this process. Now let's start to talk about short-term and long-term goals.’”

The Harwood community, including students, school staff and families/community members, also took a survey this spring on school climate. “That's a process that is of great interest to me,” Leichliter said. “I've asked for a full report made by the end of August so I can share that with the board in my first school board meeting. I would expect that to be released publicly.

“I've asked [Harwood] principals to take a look and use that for some of their action planning and goals for the coming year. Form a building base committee, and then dive deeper into that information and maybe look at things in focus groups with students or parents to address some of the areas that are of elevated concern.”

In recent years, there have been issues of school safety at Harwood and other district schools, including vandalism, vaping and violence, as well as school shootings across the country. “I think it's important that all students feel safe and connected to the school,” Leichliter said. “It ties in so many issues that tie into academic performance -- not feeling safe in school, not feeling comfortable -- they're not going to do well.

“As I've been meeting individually with each of the principals, I spoke with the Moretown principal, who is co-lead of the school safety team, about the processes,” Leichliter said. “The most important thing you have is procedures and make sure your staff is familiar with [them.] I received recently a message from a parent who was concerned about drills and were children being instructed on what to do in the event of an unfortunate situation? I think we need to do a good job of communicating those procedures for parents.

“Safety is a top concern. Ray Daigle, who's our director of facilities, ran a meeting to go over some facility issues, particularly on the issue of safety and making sure our buildings are secure. But really our best tool for school safety is our students. Working with students, on a proactive basis, to be number one responsible reporters. Number two, be comfortable with adults and to make sure that adults are informed of any concerns. I think that every student should have at least one adult in the school that they feel comfortable approaching. When you look at issues across the country, where you have issues of school safety, a lot of times it's students who are disconnected from the school process.”

Harwood Union High School students led a series of school-wide dialogues on school climate and safety this past school year and plan on continuing those dialogues in the coming school year.

“I did have a conversation in the beginning of May with three students who are on the school board to talk about overall issues and concerns. They have positives they see as well as some of the dialogue that they've seen. The fact that we would have high school students who would organize and lead groups of other students to have dialogue and recommend to the administration to make changes I think is remarkable. Some of the issues they discussed are things that we're seeing locally, or we're seeing across the nation. Vaping is a big concern. I know that the co-principals at Harwood working with the team as well as with the students who want to make some changes procedurally.”

He said one thing he wants to change is “to improve communication with parents in the community, and with staff about schools, both challenges with positives.”

This interview will continue in next week’s issue of The Valley Reporter.